Hands to Help for All, in SMU
상태바

We live with lots of worries.  The best way to deal with those worries is to find solutions by telling the concern to one who will listen and give much needed advice.  However, when we live, there are many situations that you have a concern that you can’t tell just anybody.  The one of the situations could be sex-related.  Sex is related to us nearly, but sometimes we are embrarrassed of talking about that problem to someone.  There is a place which can give you a help for this problem.  That is the Counseling Center for Gender Equality in SMU.  It is the center that deals with the most related problem with you, but it is something strange to you.  Then, how many things do you know about it?

I’m Your Friend, but You Don’t Know

01 It offers personal consultation about sexuality.
• The Center consults people that have experienced sexual harassment or sexual assault and helps to heal the scars from those sexual acts.  Not only does it offer consultation, it also gives advice on various worries people have about gender or problems with boy- and girlfriends.

02 It offers group consultation.
• The Center not only consults victims of sexual harassment or sexual assault, it also does its best to consult the attackers.  Many people often think only the victim is consulted, but at the Center, attackers are also counseled.

03 It is to assist in the finding of appropriate solutions.
• When students feel hardships due to sex, the Center can support the victim by recording the incident instead of filing a report at a police station.  It can’t directly address the affair, but it can provide the needed professional information to students.

04 It helds sex education lectures and special events about gender identity.
• The Center holds its annual event, the Cultural Festival for Gender Equality.  During the festival, the Center operates various cultural events about gender and helps students to access gender information more easily and closely.  Furthermore, it opens online education programmes and special lectures for students.

05 The last job of the Center is to research students’ sense of gender identity and problems related to sex.
• The Center often surveys students on diverse topics that investigate information about sexual things that SMU students
think and if you want to study more sex issues, the Center can recommend and lend books.

Like this, the Counseling Center for Gender Equality in SMU is doing many things for our students’ problems about sex.  However, most students misunderstand the Center as only providing consultation in cases of sexual harassment or sexual assault.  Koo Jiyoung, Department of Piano '10, said, “I thought the Counseling Center for Gender Equality only helped students in times of difficulty because of sexual problems.  I didn’t know it held lots of events, did surveys, or offered
education programmes.”

Is It People Cannot Use or Choose Not?

Although the Center provides useful activities, it doesn’t receive much attention from students.  Some students don’t even know about the existence of the Counseling Center for Gender Equality.  Why are students not interested in the Center?
First, we can deal with the problem of the Center.  According to a survey by the Sookmyung Times, about 15% of students don’t know that such a place existed on our campus.  Most of those that know of its existence, don’t know about the operations of the Center.  Most students think that the Center only counsels students.  According to our survey, about 22% of students feel the Center isn’t performing its duties on campus.  It means the students feel the center is not fit all students in SMU.  However, as we can know through the five roles of the Counseling Center for Gender Equality, it is doing some works for us like relationship problems with boyfriends, or various lectures about it.  The main reason students do not know about the center is due to a lack of promotion of the Center.  Even though the Center hosts a lot of events like special lectures and festivals, most student awareness is promoted via an Internet community, so most first year students don’t know about them.  One frosh at SMU who participated in the SMT survey said, “I had had no information about the Counseling Center for Gender Equality before I participated this survey.”  Also, the location of the Center is one of the problems.  Normally, departments that manage student affairs are located in the Administration Building or Student Union Building.  If a department is located in the Queen Sunheon Building, it is almost always in the basement of the building or on the first floor.  However, the Center is located in the Queen Sunheon Building on the fifth floor.  Thererfore, students can't find it well.  This fact is also known by the Center.  Kuem Seonmi, researcher at the Center said, “We know it must be difficult for students to locate us.  Some students often wander about before finding our office.”  As it is difficult to find, students’ indifference towards the Counseling Center for Gender Equality accelerates.

It Is Not For One, To All

The Counseling Center for Gender Equality is a very important department at SMU as it establishes students’ sense of gender identity and provides proper information about gender.  Therefore, most universities have counseling centers for gender equality for these reasons.  How can we revitalize the Counseling Center for Gender Equality at SMU?
At Chung-Ang University, policy expanded the function its counseling center for gender equality, which was controlled by its Office of Student Affair, and renamed it the Center for Human Rights in 2012.  This Center for Human Rights falls directly under the jurisdiction of the school’s president, and it conducts research and consults human rights problems arising at the university.  It is the first time a university has operated a Center for Human Rights.  Compared to Chung-Ang University, the Counseling Center for Gender Equality at SMU falls under the Education Center of Refinement.  The Center for Human Rights at Chung-Ang University deals with human rights as well as sex-related issues.  Especially, it heeds itself to students’ voices and works closely with students, so holds a cultural festival for human rights similar to the Cultural Festival for Gender Equality at SMU.  During the festival, the Chung-Ang University’s Center also hosts a film festival for human rights.  Through surveys and research, it does its best to interact with students.  Actually, the word, ‘gender,’ or ‘sex’ is causes embarrassment, but the word, ‘human rights’ is easier to swallow.  As it has selected a smoother word and expanded its role, interactions between students and the Center has strengthened.  The Counseling Center for Gender Equality at SMU should effort to get closer with students and engage in more promotions.  Students should also show more interest in the various events of the Center and participate more actively. 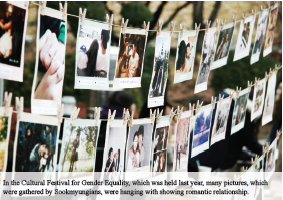 The Way We Have To Go