Certified to Do What?
상태바

Are you preparing to get certified?  Most students desire to obtain numerous certifications to land a job.  Actually, some companies require certifications for recruitment, but many students want more to make their résumés look better.  They spend at least 6 months to get such certifications and of course, they can’t even conceive of taking a rest in winter or summer vacations.  Also, they have many expenses for certification academies and the test fees.

The most famous and popular certification tests are TOEFL(Test of English as a Foreign Language) and TOEIC(Test of English for International Communication).  These are common for all ages including elementary students.  People can easily find TOEFL or TOEIC academies and lots of related books in bookstores.  In addition, Korea is the country which has the most TOEFL test examinees.  To register for the test, people spend several hours in front of a computer.  Since most companies and public enterprises require applicants to have these qualifications, people cram for them.  Some students are temporarily absent from school to study for the TOEFL or TOEIC.

Computer and IT(Information Technology) related certifications are well-known too.  Microsoft Office Specialist, or MOS as it’s often referred, is one computer-related test which has become famous recently.  Since it is a famous, official test, lots of people take the challenging exam.

According to the research surveyed by JOBKOREA, 55.8 percents of 1774 students from 4 year universities, excluding freshmen, said that they receive private education related to employment.  This study further states that English-related education—such as TOEFL, TOEIC- takes the largest portion of private education at 47.9 percent and
speaking takes the 47.3 percent.  Following was certification at 40.6 percent.  Like this, many people go for the test to land a job. 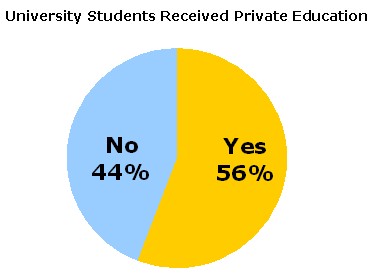 Such qualifications are not even very useful.  Non-official certifications are especially worthless since they are not recognized by companies.  For example, consultant for career, controller of sales and internet information search certification are not effective these days.  Therefore people have to choose carefully when they prepare for them.

Additionally, Im Eun Kyung, a reporter for the Joong Ang Ilbo, said students become less focused on their major since they prepare for TOEIC to find work.  They don’t spend time on their field to get a job they want; instead they choose their job depending on their TOEIC score.

This is also a problem.  Students can hardly find a time to study their major because of qualifications.  Sometimes they have to get ready to test which is not connected with their major at all.  It is waste of time.

According to Yonhap News, recently many job hunters get qualifications for employment, which are not actually helpful for landing a job.  Furthermore, out of 1,275 persons, 64.3 percent (820) answered that having certifications or employment education didn’t help them to get a job.  In particular, among 64 percent of those surveyed, 25.5 percent (325) said that it was just for filling resume and 22 percent said that it was waste of money and time.

Almost every job seeker has qualifications or prepares for employment.  However, qualifications acquired while trying to land a job usually are not valuable when people work in office.  Since most qualification tests require just simple answers to questions, it doesn’t help people to cultivate real work ability.

Most students study hard to get certifications.  Though, qualifications degenerate into documents only for employment.  Many job seekers think the more they acquire certifications the better chance to find work.  Accordingly, they have no choice but to prepare certifications to have a job.  However, unlike the past, many companies have changed their recruiting policy to hire employees who have many experiences rather than certifications.

Kim ae hee, a manager of career development center in Sookmyung Women’s University, said, “Students have to prepare certifications which are really needed for their work and required from company rather than study numerous qualifications.  Also, after they get certification one or two, they had better to have experiences by serving their internship or doing part time job.”