Backpacking around the Southern Areas
상태바

Many college students are interested in backpacking but it is difficult to actually make happen.  This was also true for me.  However, I thought about my youth and thought that it was something I should do right now.  So I found some courage and made a plan to go the southern areas in Korea with my friend.  We divided up the region where we were to go and each did some preliminary research.  Our traveling started on 12 August to Heanam.

Along the road to Nokudang, a historical house, there were so many rice fields that green was the only color one could see.  When the wind blew, I felt the waves of rice and they looked beautiful.  However, when I was told about the story of the land, I regarded the land as not only a part of nature, but also a fundamental historic site of people.  My friend said that she read the book “My Exploration of Korea’s Cultural Heritage” by Yu Hong-June.  He narrated the following:
In Heanam, the Yuns and the Jungs had a reputation for long time.  In fact, the Jungs were more powerful and had more rice paddies.  However, the Yuns and the Jungs had different ways of passing on inheritances.  The Yuns gave their family property only to their sons.  The Jungs, on the other hand, passed on their property without the distinction of sex.  The Yuns and Jungs became related through marriage because both were good families in their district.  As a result, the Yuns had more rice fields, thanks to a daughter-in-law from the Jung family.  Finally, the Jungs of Heanam didn’t keep much property and lost their great fortune.

Although the lots still exist, the owners of the land have changed.  I thought about the delighted and sorrowful people in the long history and it made me shudder.  With strong emotion, we entered Nokudang.  The head family of the Yuns of Heanam was still living there, so we couldn’t view every site.  We did, however, meet one old villager who was able to explain more about the Yuns of Heanam to us.  When we were walking amongst the relics, I felt an indescribable sensation because I was walking along the same road with Gosan.  I know Gosan from literature, ‘For Seasonal Songs of Fishermen,’ but didn’t know that Gosan was a nobleman.  He reclaimed the land by drainage at his own expense and shared the fortune with the people.  Also, I saw many literary works and pieces art from the Yuns of Heanam and their wives.  I was honored just to see the work.  I felt the noble Joseon family through such a dignified house, remains and forest. 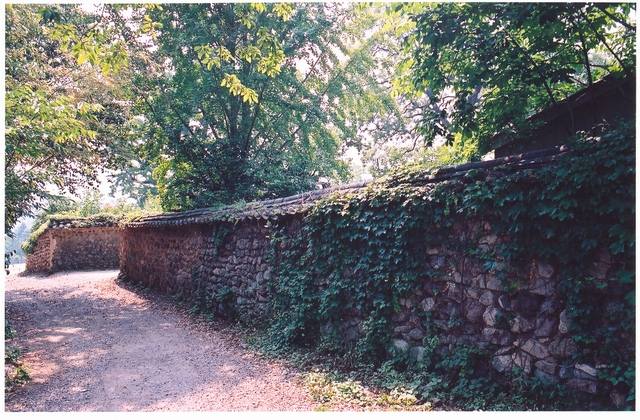 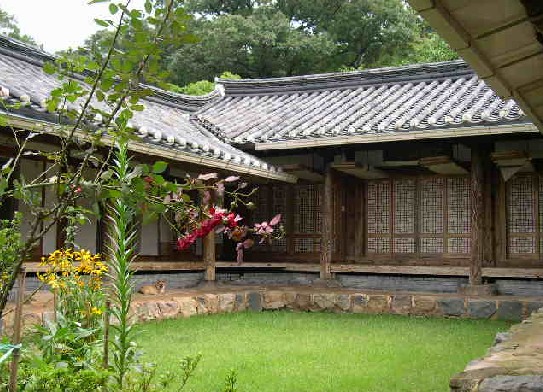 Although we planned to go up to Mt. Du-ryun to reach Daehung Temple, we hesitated to climb the mountain because we had already walked such a long distance just to get to Nokudang.  A monk saw us and stopped his car just at the right time.  We took the car up the mountain.  The driver of the car was a Buddhist priest.  As we drove to the temple, we talked about our travel and Buddhism.  He invited us to his small hermitage and we accepted.  As soon as we got out of the car in front his hermitage, we were really surprised at the beauty of the landscape.  The scenery seemed to be a painting because the weather was cloudy and the hermitage was located in the heart of a mountain.  Never in my life have I experienced such a view like this.  I was so touched that I couldn’t move.  Since I’d been raised as Christian, I had never experienced a connected to Buddhism.  Such unfamiliar things like that a room of the monk was a thatched cottage made my heart flutter.  There, we met two ladies and one man and everyone took tea made by the monk and ate sweet green grapes.  The green tea of Daehung Temple was popularized by a Joseon monk.  The Japanese plundered the tea of Heanam in the colonial period.  Since that time, the Japanese changed the name of the tea to green tea.  Despite the coveting of the Japanese, the tea still was nice and I drank three servings.  After chatting with them, we went out to have a dinner.  We reached a restaurant that serves chondak.  Until that time, I had never eaten chondak.  The monk and adults said, “When you travel, you should eat well, so take a lot.”  We were really thankful and had a lot of the delicious food.  Chondak is made from chicken and herbs.  Firstly we ate the chicken and soup and then we ate rice porridge.  When I first tried the food, it was a little strange for me.  However the more I ate, the more I could feel healthy and satisfied.  During dinner, we sat between two ladies and a man.  They said, “I remind my daughters from you.”  I really appreciated their kindness.  When we went back to the hermitage, it was a perfect night.  With night upon us, a completely darker night than what is found in Seoul, we had some time to write our thoughts and were soon asleep.  The first night of Heanam ended.

On the second day of our adventure, we awoke to the sound of a wooden gong.  The morning landscape was as nice as anyone could ever describe.  We went sightseeing in earnest through the temple.  The temple was constructed during the Silla dynasty, and had a stream all around it.  Although I didn’t know in detail about the beauty of the traditional structure, I could feel how the fantastic temple harmonized with the surrounding nature differently than modern architecture, which does not.  Unfortunately Daehung Temple has a blot, which is the structure built by Park Chung-hee, the former authoritarian president of Korea.  It was perfectly modern so it spoiled the landscape.
When we ended the sightseeing, we walked around Mt. Du-ryun.  Because the air was really fresh, I felt myself revived, so I was really happy.  We shook hands with the kind monk and shared the blessing words and started to go for Ganjin. 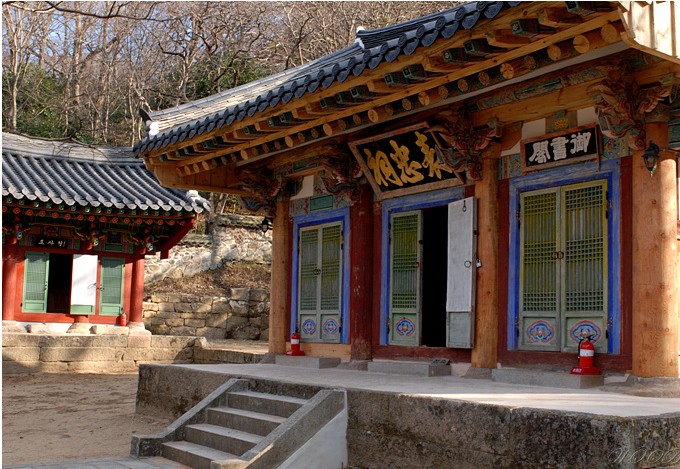 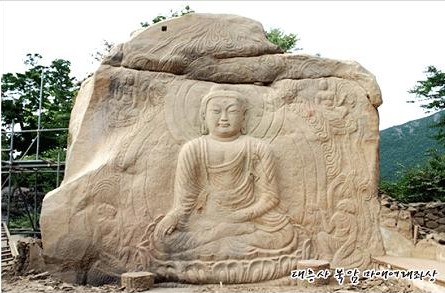 Next, my Gangjin travels will be continued.