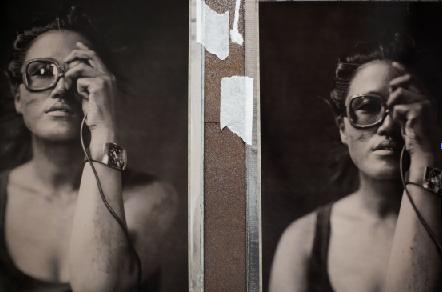 To a photographer, himself or herself is the most valuable subject.  As long as I have a camera and film, I can press the shutter in front of me.  Also, as long as the photographer has passion for photography, the sound of the shutter continues.  I want to record myself continuously.  Even when I get fatter and older, I will record myself.  I can be anything in front of my camera.  To me, I’m always a beautiful subject.

THE SOOKMYUNG TIMES (SMT): Today Photoshop is widely used for retouching photos.  As a photographer, do you think it is desirable?

ZO SHUN HI (ZO): Many people think that it is cheating to use Photoshop.  However, this only makes sense when Photoshop is used too much.  I think the extent to which Photoshop is used is the choice of the photographer.  In the analog era, the photographer controlled the developing and printing of film.  These days, those jobs are done by Photoshop.  As we are becoming more digital, the darkroom has been substituted by the computer.  By using Photoshop, making the decision of keeping the photo or not is the photographer’s responsibility.  When models demand Photoshopping, I grant their request.  The photographer sells their image by taking beautiful photos of their merits, not taking photos of their flaws.  I think it is my duty to cover my model’s weak points.

SMT: You worked with analog cameras for more than 10 years.  Recently, digital cameras appeared and analog cameras disappeared fast.  Didn’t you have any difficulties going through this change?

ZO: 2 years have elapsed since I started working with digital cameras.  At first, I wanted civilization to stop developing, because cultures were changing too fast.  I thought that I would use the analog camera indefinitely.  However, the advertisement industry and the world in general began using digital cameras more and film disappeared.  The photographer used much more expensive film than ordinary people.  As laboratories which develop film vanished, it became harder for me to maintain my use of analog cameras.  When I first used a digital camera, I was also awkward with it.  However, there is something good about the development of civilization; the range of motion becomes wider.  Also, the tone of photos and the viewpoint of observing objects are changed.  It was certainly an opportunity for me and I could try new things.  At any rate, I could venture into mannerism.  Having positive or negative effects depends on your mind.  Using a digital camera had a positive effect on me and I’m learning about it now.

SMT: If you had to express your life in one photo, which photo would you want to take?

SMT: What is the attraction of taking pictures compared with making a movie?

ZO: Most people think that a photo is a shot of an immobile subject that does not require movement.  Also, we take photo with a pose after counting 1, 2, 3.  That is a stereotype, too.  Photos are taken of movable things; they are just depicted in one shot.  When I take a photo of a model, I’m trying to catch the model’s motion.  A movie flows, but a photo remains for a long time and there are many invisible stories in it.  Compared to a movie, a photo is less informative and explanative; rather, it is more symbolical.  In addition, I can show a person’s past, present and future by taking a photo.

SMT: These days, most people judge by seeing only one photo. Because of this tendency, haven’t you had some problems with other people?

ZO: Recently, I read some negative writing about me on an Internet blog.  At first, I was angry and sad.  People are so different and they have all different thoughts.  Even though the writer didn’t know me well, how could he or she say whether my photo was truthful or not?  When I had my own homepage on which to upload my photos and share them with people, of course, there were many people who liked my photos and advised me.  However, there were also people who abused me and my photos.

SMT: Could you give some advice to Sookmyungians who have dreams of being photographers or other goals?

ZO: It is important to find your special ability in photography and in everything.  Also, it is much better if you find it sooner because you can prepare, study and endeavor for that.  You can do it well by going through experiences; find your favorite activity and devote yourself to it passionately.   Then you can do it well.  It is a natural that you will confront many obstacles and difficulties.  However it is impossible to avoid any tiring and difficult situation.  I also had hardships and problems, but I didn’t give up.