Towards Understanding Women in Bangladesh
상태바

A PHOTO BY HS

On May, 2008, Sookmyung Women’s University (SMU) greeted sisters from Bangladesh, Ruksana Akter (RU), and Asma-ull-Hosna (AH).  They, in 2009, study hard and walk around the campus wearing their traditional clothing.  SMU students always stare at them with their fresh eyes.  As students have more and more doubts about the sisters, the Sookmyung Times (SMT) met them to ask some questions about Bangladesh, and some of the differences between women in Korean and in their country.  It will be a great experience and helpful time to Sookmyungians.

SMT What do you feel about women’s universities?

SMT What is the scarf called?  And what is the meaning of it?

RU There is no meaning of this scarf.  It is just a part of Bangladeshian’ traditional clothing called orna.  Also our religion, Islam, has women wear it so I just follow the religion.  However, there are many women who wear jeans and T-shirt in Bangladesh.  It is optional to every Bangladesh woman.  Speaking frankly; it isn’t totally against freedom of women in Bangladesh.

SMT Be more specific, what do you think of Korean women in their lifestyle?

RU Korean women are open-minded and ‘modern-minded.’  They are wearing western clothes like blue jeans, skirts, and T-shirts.  There are few women who wear Hanbok, Korean traditional clothing, in the street.  Am I right?  Also, they stated their opinions and views more freely than women in Bangladesh.  To advance into the society, they should study hard, work hard, and think a lot.  I think these characteristics of Korean women are the most significant ways to make them to develop their faculties.  Also, this attitude inspires me to study harder.  And they are open-minded to enjoy their lives.  They can adapt as necessary, but maintaining their dedications to their
own opinions.

AH I feel their life-style is cool. It is the same reason with my sister, also the relationship with their boyfriends. In Bangladesh, we cannot even think about taking boyfriends’ hands in streets even if we already got married.  I don’t believe hugging is commonplace in Bangladesh.  The relationship between boys and girls is quite strict with non-married couples.  Also we can’t imagine a bottle of drinking.  I like coke, soda and other beverages, but I have never had a drink since I was born.  My religion doesn’t allow people to drink, so drinking is forbidden in Bangladesh for both man and woman.

SMT Then what do you feel about average marriage age over 35 of Korean women?

RU I think I use too many ‘cool’ words in the interview.  This average age is good and fair to women who don’t care about the age, because they have freedom to study more, change the work, and be challenged with a new thing they had never experienced.  Most parents in Bangladesh choose husbands for their daughters to get married. However, like my younger sister, there are some women who also received great education since they didn’t have any obstacle to study like bringing up their babies and supporting their husbands.

SMT Are there any differences between women in Korea and in Bangladesh: fashion, mind, or freedom?

RU Fashion?  Most of Bangladesh women like wearing traditional clothing like saree, or salwar-kamizorna, but Korean women are more flexible to western fashion than Bangladesh women because of development of the Internet and other media.  And mind?  You mean the way of thinking?  Well, I believe they can easily and freely express their feeling, and naturally share their opinions with friends, professors, and parents.

SMT Is Bangladesh still negative to a high position of women?

RU Not exactly. As you know, we have lots of women in public, like the prime minister and a leader of a party. Therefore, people have gradually changed their view of women’s high position.  Women graduating from universities are eager for working and continuing to study to get a master’s degree or MBA.  They desire to advance into the society and to acquire a reputation from the public in Bangladesh.

AH My older sister but younger than RU has already achieved a master’s degree and is studying for an MBA in one of Bangladesh’s universities.  I feel her eagerness for knowledge is respectable.  As people have become more open to women’s studying than before, women are also selfmotivated.

SMT What are views about women’s advancement in society?

RU Nowadays, it is opening a little, and people are gradually altering their biased views, because the prime minister in Bangladesh is a female, and a leader of the opposite party is a female, too.  You see, there are many famous women in public in Bangladesh.  Therefore, the conditions are obviously changed from before. 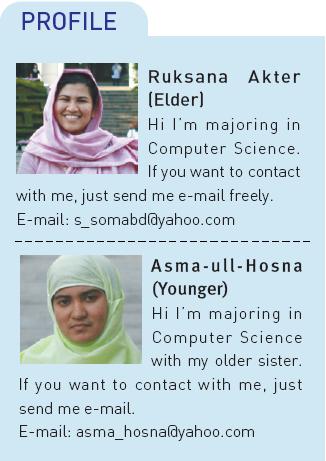