Before the 1920s, pink symbolized men rather than women and blue was the color which symbolized
women.  Blue represented purity and was also used to symbolize the Virgin Mary in the painting.  However, after World War II, red colored military uniforms changed into the color navy blue and this made blue to represent men and pink to symbolize women.  Pink is being loved from most of ladies and there are a big number of pink manias in the world.  It is undeniable that the color pink is charming, fascinating and lovely.  Many girls are crazy about the color pink.  The Queen of Russia Yelizaveta Petrovna (1709~1761) felt jealous to the beauty of color pink and prohibited wearing pink.  Any women wearing pink except the queen herself were imposed with heavy punishments.  Queen Yeizaveta commanded hands or feet of them who wore pink to be cut off, even when it was not shown outside.  Pink has been loved and is being used visually for decorating or key fashion items and now, pink also got its substance over its charm and beautiful appearance.

Progressive Modern Pink In and Out

If the color pink was being used only visually in the past, it has taken action with meaning and emblems in society nowadays.

· Pink You Are My Heroine
One of the world campaigns, the Pink Ribbon, was started in 1992 for awareness of breast cancer and the importance of early checkup.  The pink ribbon became a symbol which represents womens beauty, health and freedom, and it is spreadin its symbolism worldwide.  The Korean Breast Cancer Foundation and the cosmetic company AMORE PACIFICare hosting a Pink Marathon for Pink Ribbon campaign every year in all different regions in Korea.  The total amount of entry fee of this marathon is donated to the Korean Breast Cancer.  Thus, Pink is given a big meaning in society.  Moreover, Seoul assigned pink as womens safety color.  Parking spot near the entrances of buildings which are safer than the dark ones farther from buildings are marked with pink pictorgrams and have CCTV installed for women drivers safety.  Also Pink Taxis have appeared to protect women from crimes an provide a safe way back home.

· Girls into Society
The Pink Marketing became more active in the society as more and more women are entering into the public affairs and workforce.  Not only the cosmetics companies which aim female customers in the main, other companies are also releasing limited editions or special edition products colored with pink.  For example, the car model, Creative Matiz launched a Pink edition titled dream car this year.  Long ago, driving a car was on permitted to men, and moreover driving was not a familiar thing for women in the past.   However, now even though the color pink might target only the women customers, the number of new models colors with pink is increasing.  During November every year, the film entertainment Cinus holds Pink Film Festival.  For this film festival, Japanese adults movies are shown on the screen and only woman customers are allowed to enter to see these movies.  Normally, adult movies aimed mostly male customers before, but under the name of Pink Film Festival, it is now ONLY FOR WOMEN.

· Pink Power
Pink Leadership is another name for the Servant Leadership that our campus SMU is practicing.  The Pink Leadership is the leadership which focuses on womanly sensitivity such as flexibility, tolerance, and serving.  The importance of this leadership is already attracting eyes throughout the world and SMU is the first university with a specialized leadership program in Korea.  The goal is to develop womens gentle and tender leadership capability through strengthening leadership education. 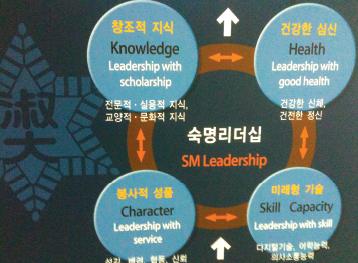 Pink Being Proud with Women

Pink was the color of slender princesses in the fairy tales who are all so delicate and stir up the protective instinct.  However, pink has transformed its image of women being the weak in the society.  Pink has been reborn with its substances over its fascinating visual attraction.  Pink represents women and its meaning and symbols changed as womens place in social life rose.  The color pink is reflecting how women have grown stronger and influential in the society at present time.  Now, pink has taken place as a proud lifetime companion of women.  The pink will keep on glowing brightly as women are always.