Generally, the Department of Justice (DOJ) is the place working for establishing and enforcing the law and judging the crime.  And an economist is a person who studies and analyzes various economic situations, and then infers the result and influence on the economy of the whole society, and further, that of the world.  Then what do you think of an economist in the DOJ?  People feel really curious about what this job mainly works for.  Dr. Russell Pittman (RUSSELL), exactly working as an economist in the DOJ, gave clear answers with the relationship between Law and Economics.  Let＇s begin with his college life to figure out how he decided to choose his job and his future.

In His School Life

RUSSELL When I entered the university, my major was undecided.  “Undecided” seemed like “I’m still finding my future field.”  Actually I had never thought about what I would do before getting into college.  I thought I would study literature or philosophy at that time.  In the U.S. universities, it is common that students usually don’t choose their major until second and third year of college, so they can try lots of courses in different fields.  I believed it was also good and lucky for me to experience many other courses and choose what I really want.  I also thought about applying to a music conservatory for my double major and being a French horn player, but the professor finally didn’t want me to do that, and he said, “Russ, just go to college.”  Also when I tried lots of classes which aren’t related with his major, economics, at the same time, I was taking the economics class, and I got attracted to that major.

SMT What does a director of Economic Research in Antitrust Division of DOJ do?

RUSSELL I’m a staff economist.  There are about 40 economists in the Antitrust Division who work on the cases.  It is a kind of case investigation.  We are investigating industries and companies whether they violate the competition law.  Recently, I’m mostly working on electricity industry.  Two electricity generation companies want to merge, and we are analyzing whether or not it is harmful to competition in electricity generation.  Recently, the electricity industry is so complicated and difficult that I spend most of the time studying the electricity industry with my colleagues and evaluating whether this merger would be anti-competitive or not.  And the case can be changed; I did investigate and analyze railroad and health insurance cases before.  After the case investigation, I learned a great deal about each industry.  A lawyer also has to learn about his sector and industry in order to present for his clients, and companies.  Our clients are U.S. citizens, so we are prepared to protect them.

SMT Most people are wondering how two look-like-reallydifferent studies which are Law and Economics are related.  Please explain the relationship between the two fields and give us some simple example to understand it.

RUSSELL In competition law, economics is a very important part of the law, because the law said this merger would be prevented if it’s against competition.  Then economists evaluate the merger case and determine what the DOJ will decide.  For example, when I investigate my electricity case, I’m working every day with a lawyer.  That’s because the economist will know the merger will be harmful to the competition and the lawyer will know how we deal with it if I decide to block the erger.  The lawyer knows what kinds of evidence we need and witnesses talking about industries, and documents to show to a judge.  The economists and lawyers have to work together to block and stop the merger.  And it is partly because the competition law itself is mostly vague.

RUSSELL Simply, the Antitrust Agency, the DOJ, and the KFTC (Korea Fair Trade Commission) are doing the same work.  We are investigating whether the merger and practice are harmful.  If we decide they are, then they must stop.  Unlike KFTC, our agency has to go to court to block the merger, but the KFTC can issue the order to stop it.  We’re trying to protect public consumers.  The best thing about my job is that, some of my economist friends also work for the private antitrust consulting firm and some of my antitrust lawyer friends work for the law firm.  If the lawyer in a law firm consults his clients, his clients are mostly companies, and he has to protect them.  However, my clients are U.S. public and public welfare.  I like that much better. It is another way I feel lucky. 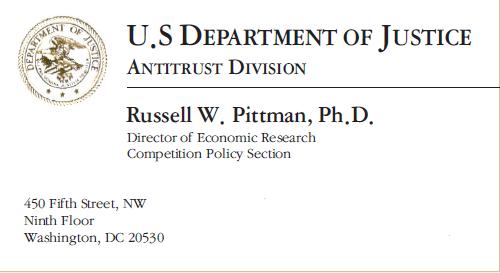