Go a Step to the World
상태바

SMU is currently processing the programs with 171 institutions of 26 countries by invigorating a variety of academic and student exchanges.  There are three International student exchange programs in SMU: Student Exchange Program (SEP), Study Abroad Program (SAP), Global Dual Degree Program.  SEP is a program where students from one university choose to study aboard in partner institutions.  Over the exchange period, an exchange student has to pay tuition in their home university only.  On the other hand, SAP is a little different from SEP in that the applicants for the program have to pay tuition in both universities.  Also, the number of the applicants is NOT limited compared to SEP.  However, SMU has waived 80% of the cost of tuition for the SAP applicants by offering a Sookmyung Scholarship.  Through these programs, the credits students get can be transferable to this university, based on the prescribed procedures.  In addition, the applicants for both programs must follow the same selection process.  The application period for these programs of SMU is progressing three times a year depending on required language, exchange period, and courses due to operating system in each university.  The following table gives concise information about exchange programs. 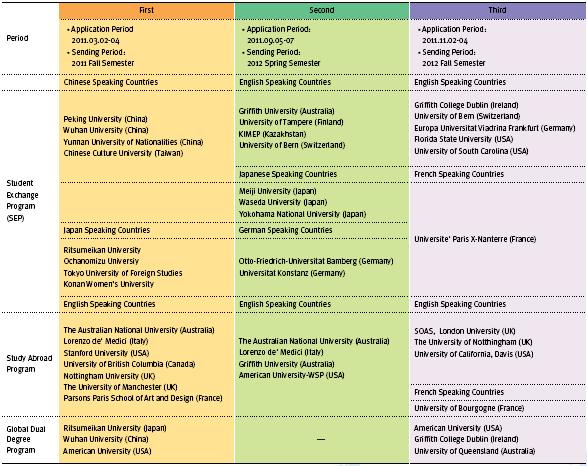 To be selected as exchange students, there are some basic requirements.  First of all, the applicants for exchange
programs are expected to have completed at least 1 year of a university or college degree program.  Transfer students need to have finished more than one semester after having transferred.  Secondly, the students who
have a total GPA (Grade Point Average) of over 3.0 at their home school can apply for it (Graduate students GPA 3.6).  Also, the applicants are required to take courses in a second language.  Students who want to study in English speaking countries have to get a TOEFL score, a minimum of 213 in CBT, or 79 in IBT, and take at least one course in English during the regular or seasonal term (except English liberal arts).  The applicants for it in non-English speaking countries also need to take authorized language tests corresponding to the country.  However, the qualification can differ depending on each university and country.  That’s why the students who want to participate in the programs should check the exact information.  SMU is offering further information about them on SMU’s websites and holds a briefing session on global student exchange programs in March and September each year. (http://exchange.sookmyung.ac.kr)

Do You Want to Know the Secret?

Here is Kim, School of English ’10, who will be sent to Canada for the next semester as one of the

exchange students.  Now, she gives her secret method for you how she can pass a selection exam to be an exchange student.  Kim failed the exchange student selection at first last semester.  By letting this failure be a lesson, she could know where to put more efforts and how she should prepare for interviewing.

Kim found some comments on a Sookmyungian board that about 90~100 TOEFL score maybe quite a safe grade for passing.  For making higher grade as possible, she spent her vacation taking TOEFL lessons, studying with group study members, and reviewing in a reading room.  She got a score in the high nineties and could be selected this time.

Kim said her first application might be frustrated by low scores, so she achieved 3.7 from a previous score of 3.2.  For writing a letter of self-introduction, she advised “It is important to do activities related to the region to which you want to be sent.  After that, writing these things to be felt well-organized is also needed.  Reading acquaintances’ letters of selfintroduction is helpful.”

Different from last year’s interview, in this year, the interview was done only in English, not Korean.  There a Korean and a foreigner interviewer.  Kim said, “For interview, quality of answers is important, of course.  However showing attitude with confidence and anticipation are more important I think.  Before an interview time, feeling nervous is the same for everyone.  Also, I trembled much, but I want to say, DO NOT TREMBLE.”

Do you want more information and advice about being an exchange student?  There is a board named ‘I passed!!’ dealing with secret methods like Kim’s story.  Students hoping for passing as exchange students can use that board.  This board opened June in 2010, so it needs more help and information from students who passed already. Come here, and give and receive many things from each other. (club.cyworld.com/goabroadsookmyung)

It really takes a lot of effort to be selected as an exchange student.  Nevertheless, many students want to participate in those programs.  What is the merit of participating in the programs for a student?  La Young Hwa, Department of Public Relations & Advertising, who studied Journalism in Tampere University in Finland said, “During the time when I studied in Tampere, the most meaningful for me was that I learned how to understand different opinions with various angles through lectures.  Although at first I felt awkward in the environment and was discouraged from that, as time went by, I had the courage to discuss things with the Fins who were so enthusiastic to participate in everything in the lecture.”  Also, another exchange student, Lee Su Jung, who studied in Griffth College Dublin of Ireland said “the most valuable thing she gained in Ireland is the experience which makes her more confident.”  It is never easy to live in surroundings which are not familiar for oneself.  However, through
the exchange program, students could have the opportunities to improve the ability of second language learning, understand different cultures, and broaden personal and educational perspectives.  However, some students also point out some problems.  One of the problems proposed is that the number of partner universities is limited compared to other universities.  Student ID harabire on the Sookmyungians Bulletin Board said, “I think even though many students want to be selected as exchange students, there is little opportunity for them because some
universities do not have an exchange agreement with SMU even if SMU continually has been affiliated with the university.”  Also, an exchange student who didn’t want to reveal her name said, “It is problematic to allow the credits earned to be transferred, and the procedure to transfer credits is fairly complicated because the system of each university is different.”  Another exchange studentsaid that even though SMU offers information about the exchange programs, it is still not enough to get all the necessary information.  Nowadays, SMU tries to offer a variety of international programs, including exchange programs such as Sookmyung International Summer School, Berkeley Summer at Sookmyung and activate mutual interaction of institutions and students with global universities. However, in order to more develop a truly global Sookmyung, careful consideration for students and organic
relationships between students and universities could be needed.

Other Choices Wait for You

If you feel burden about quite a long period or cost of being an exchange student, and also if you want to go abroad in a way similar with exchange students, there is another choice.  That is a short-term program for going abroad. SMT explains about some of them.

Netherlands
Where : University of Utrecht (UU)
When : During summer vacation
Period : Difference according courses (1 week~ 6 weeks)
C o s t : Total cost is about Netherlands 2,500,000 won and about 1,000,000 won scholarship is offered
With ‘Utrecht University Summer school’ program, you can choose various lectures notified on homepage of UU. Having lectures, group discussions with various nationalities and taking one exam are the general curriculum.  After finishing this course, you can travel Europe near the Netherlands.  A maximum 6 credits are admitted in SMU.

Walt Disney World (WDW) Internship
Where : In WDW Orlando, Florida, U.S.A.
Period : One semester course, one year course
In the Theme Park, Water Parks, and hotel in Walt Disney World, you can have lectures in Florida State University and earn money through internship in WDW.  Lectures consist of some subjects represented by Intercultural Communication, Cross Culture Seminar.  Work about 6~8 hours a day at various park jobs including merchandiser, chef, and attractions who are helpers in the amusement park.

All students planning to go abroad need to know safety regulations for going abroad.  Here are abridged five things among several cautions to remember.  First, there is DongHang system which is offered by Ministry of Foreign Affairs and Trade (MOFAT).  If you apply for it online before going overseas, MOFAT can protect and accompany you anywhere in the world as DongHang’s Korean meaning literally.  Second, MOFAT call center’s number +800-2100-0404 (in foreign countries) has to be remembered.  It is free and it can help whenever you are placed in some dangerous situations.  Third, please pack copies of passport, ID card to prepare for emergency.
Fourth, check your destination’s danger stage which is divided 4 stage before go abroad.  If you go to nation which is classified most dangerous stage, you should pay a fine.  Lastly, all these information are offered in detail at www.0404.go.kr operated by MOFAT for letting the whole nation know rules for safe overseas travel.
저작권자 © 숙명타임즈 무단전재 및 재배포 금지