20 years ago, Tim Berners-Lee made the World Wide Web (WWW), and now his next goal is to make an open web with various links.  In this course, Tim Berners-Lee explains the start of HTTP (Hyper-Text Transport Protocol), and the difference between text and data.  Also, he talks about how to improve the quality of our lives with linked data, and what we should do with data. 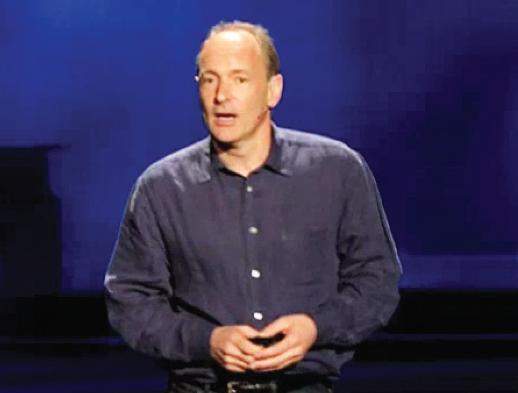 The Start of HTTP

In 1989, he wrote a memo suggesting the global hypertext system.  Nobody really did anything with it, pretty much.  After 18 months, he basically roughed out memo as HTML.  This was made it out of frustration.  Lots of people were coming from all over the world.  They brought all sorts of different computers with them.  They had all sorts of different data formats.  All sorts, all kinds of documentation systems.  If he wanted to figure out how to build something out of a bit of this and a bit of that, everything he looked into, he had to connect to some new machine.  Also, he had to learn to run some new program, and he would find the information he wanted in some new data format.  It was just very frustrating.  The frustration was all this unlocked potential.

Documents are what you read.  You can read them, and follow links from them.  All the kinds of stuff you can do with a computer is data.  Therefore, he wants us now to think about not just two pieces of data being connected, but a world where everybody has put data on the web.  And he called it linked data.

If someone takes one of these HTTP names, and he looks it up and he does the web thing with it and he fetches the data using the HTTP protocol from the web.  After that, he will get back some data in a standard format which is kind of useful data that somebody might like to know about that thing, about that event.  Also, when he gets back that information it’s not just got somebody’s height and weight and when they were born, it’s got relationships.  Data is relationships.

Want to know more about HTTP and linked data? Visit SNOW (http://www.snow.or.kr) and find ‘Tim Berners-Lee on the next Web’ lecture.  You can learn more about data in our lives throughout his lecture.

· Rough something out
- To draw or write the main parts of something without including all the details
Ex) She roughed out the design on the back of an envelope.
· A bit of
- Used when talking about unpleasant or negative things or ideas, to mean ‘rather a...’
Ex) The rail strike is a bit of a pain.
· Fetch
1.  [VERB] If you fetch something or someone, you go and get them from the place where they are.
Ex) Sylvia fetched a towel from the bathroom.
2.  [VERB] If something fetches a particular sum of money, it is sold for that amount.
Ex) The painting is expected to fetch between two and three million pounds.