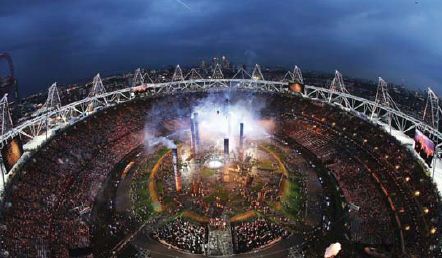 The 2012 Summer Olympics was held in London, United Kingdom, from the 27th of July to the 12th of August.  It was also called the “Twitter Olympics” being the first to be held after Twitter was invented in 2006 (the internet site did not take off until after the 2008 Beijing Olympics).  Twitter enabled people to post instant reactions and cheers towards the athletes and the games.  Twitter also sent one of the athletes home.  One of the controversies this year was the expel of Greek Triple Jumper, Voula Papachristou, who posted a racist tweet mocking African immigrants.  Another controversy was the clock error during a fencing match between Korean fencer, Shin Alam, and German fencer Britta Heidermann, where the match time was prolonged enough for Heidermann to score another point when otherwise Shin would have won.  The Summer Olympics are hosted every four years, and the next one will be held in Rio de Janeiro, Brazil in 2016.

Libya : The First-ever Peaceful Power Transition to a New Parliament

After Gaddafi’s 34 years of violent politics, the people of Libya sees light as the ruling council transfers power over to the newly elected national assembly on the 8th of August.  On July 7, Libya held its first fair election to vote for the 200 seats that form the new assembly.  Since 1977, Gaddafi has worked to bring in as many military supplies as possible into the country, leading to a bloody reign.  The Libyan Civil War which lasted for 8 months succeeded in overthrowing the Gaddafi government, and has started to reconstruct their country in a civil direction.  On August 9, Mohammed Magarief, former opposition leader, was elected as the head of the newly formed assembly.  On the same day, Magarief pledged that he will keep neutrality during his period.  He has proposed to broadcast all meetings of the assembly live on Libyan television, and promises to “remain close to the people.”

The trial against Gu Kailai for murdering a British businessman, Neil Heywood, was held on the 9th of August, and was concluded in just six hours.  Last November 13, Gu Kailai poisoned Heywood, an old family business partner, with cyanide when he asked for a drink of water.  Kailai admitted to this
accusation in court but argued in her defense, that the motive of the murder was Heywood’s blackmailing of her son, Bo Guagua.  Heywood demanded from Bo 14 million pounds (around 25,000,000,000 won) which he lost from an investment in the Chongqing city where Bo’s father, Bo Xilai, used to be mayor.  Media are speculating that the Communist Party leaders in China are hoping to use this trial as a chance to revitalize their reputation.  Bo Xilai used to be a former leader in the Communist Party, and was expelled due to the corruption and misdeeds he was involved in.

On the 5th of October in the state of Wisconsin, US, seven people, including the culprit, died due to a shooting rampage that happened at a Sikh temple.  The criminal Wade Michael age (40) committed suicide after the rampage and this case that resulted in 20~30 casualties was found out to be a hate crime caused by a white supremacist.  Meanwhile, the president of USA, Barack Obama, contacted the prime minister of India to express condolences about the shooting that happened at the Sikh temple.  Sikhism is a religion that believes in one god and is one of world’s top five religions.  It is
said that about half a million people believe in Sikhism in America.  Because Sikhs grow their beard and wear turban like Muslims, in America many accidents attacking Sikhs happen due to misunderstanding them as Muslims.  According to the confederation of Sikhism, after the 9.11 terror, about 700 incidents attacking Sikhism have happened in the US.

Brazil : Movement of Forming a Pirate Party in Brazil

On July 29th, the Brazil Pirate Party Promotion Committee expressed officially at a ceremony that was opened in Brazil’s third biggest city Recife, that they will form a party in the near future.  In this ceremony, the executives of the Spain pirate party attended.  The Brazil Pirate Party Promotion Committee announced that the working group made up through the Internet is propelling forming the party currently.  Pirate is a word that refers to those who download illegally through the Internet.  The Pirate Party was formed to advocate illegal downloads on the Internet (so called committing piracy) and first entered Europe’s political circle in 2009.  They are demanding for free sharing of information on the Internet, abolition of copyright and patent law, and so on.  Pirate party is formed in other countries, including Germany, France, and Spain, and its members are increasing daily.

Argentina : Only the Winner of Lottery Gets the Salary

According to Brazil’s daily news Estado de São Paulo, Argentina local governments’ financial condition is getting worse since 2002, and is sinking into serious state especially since 2005.  Currently a few local governments in Argentina are facing bankruptcy due to decrease of financial support fromstate governments.  In this condition, a local city called Biallete Mase in Argentina said that they will pay their government employees by lottery.  This city’s mayor stated that because of severe financial shortage, the city cannot afford to pay all the employees, so they decided to determine the order of people getting salary by lottery.  Despite the local governments’ complaints, state governments announced that they can’t increase the financial support, due to increase of budgets that caused by last year’s elections and their promise of pay raises.  As Argentina’s state governments’ conditions are worsening, in May 2012, 13 states out of 24 provided their employees’ fees and expenditures for public works later than the due date.