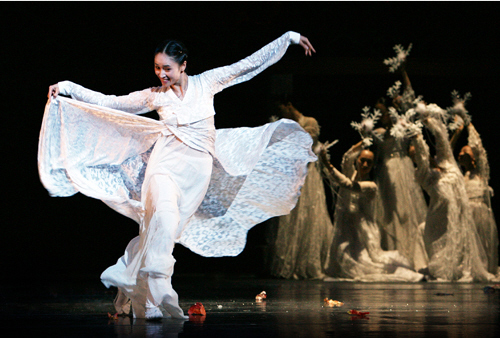 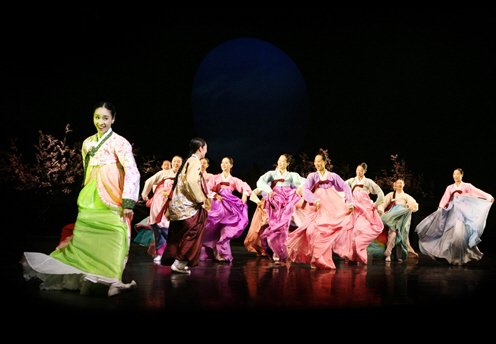 All Korean have been heard about Chunhyang from their childhood.  However, Chunhyang shows herself through dance and music.  Because it was nonverbal performance, foreigners were possible to sympathize and appreciate enough.  Before the performance starts, there is an explanatory title in Korean and English.

If you think Korean dances are unfamiliar and uninteresting, Dance, Chunhyang could prove it i

s not exactly.  During the performance, you wonder whether it is real Korean traditional dance or not.  Moreover, the 30 musical performers in the National Orchestra of Korea and the National Changgeuk Company of Korea played back ground music lively.  The instruments of the Asian and Western were used like the timpani, cello, violin and a kind of zither.

The stage setting is also worthy of attention.  Big swing which crosses over the seats, the stream which was set in the front part of the stage and stage lightening.  Besides, the change and feature of four seasons were displayed beautifully.  The clouds gathered, moon rose and wind blow in back of stage.  In addition, the frame of stage was designed using the Korean script.

When Chunhyang sits in a swing in Dano, Mongryong falls in love with her in the story.  Her beauty also charms the audiences.  Besides they might be surprised, because the swing comes and goes over their head.
Bangja and Hyangdan were looked so waggish.  Also let us know the situations of those days through an inauguration of a district magistrate and the state examination in this performance.

When women wash their hair by the streams, the eyes of the audiences were focused on the fascinating ambience.  The scene showed off voluptuous charms of women.  The dance of men was dynamic and intense in various scenes such as appearing a royal secret commissioner, breaking a gourd with a stick, cutting a straw effigy for exorcism, punishing a corrupt official.

Additionally, their brilliant costumes which are Korean dress appealed to the audiences and catched their eyes.
Above all, the critical scene is the love and farewell of lover of course.  Their pathetic and impressive spectacles moved the audience deeply.

The body has a lot of possibility more than our thought.  The expressions through the body seem like boundless.  For example, all of the emotions such as pleasure, anger, surprise, heartbreak and affection were able to show.  Even though this performance was running without a single word, the audiences feel free to delight in the performance.