However, historically art and technology have not always been separated.  Actually, the English word ‘Art’ originated from the Latin word ‘Ars’ which means both of art and technology.  Before the Middle Ages at least, ‘Ars’ was a wide-ranging concept that included simple skills to all kinds of knowledge and accomplishments.

But its meaning was retrenched because a concept of beaux arts—or fine arts—became influential in the mid-eighteenth century.  However, after 1934 when the German philosopher Walter Benjamin (1892~1940) reading his paper, The Work of Art in the Age of Mechanical Reproduction, art and technology became unified again.  It means the interaction of the two fields has widened over the decades.  It could possible because both of them need imagination to create something.  In the modern art, the tendency of science is more prominent than any other period.  Kinetic Art, Op Art, Laser Art, Holography Art, Fractal Art and Digital Art prove that art and science are integrated.

There was an exhibition, its title was "2007 Science + Art" from November 8 to 11 at Yangje Art Center .  The Ministry of Science and Technology and the Ministry of Culture and Tourism sponsored the exhibition to improve the culture technology.

Via this exhibition, they have a plan to get an opportunity to lead the international world of art by developing various culture contents which is based in Korean's high technology.  Lots of high technology and art works were fused together and displayed, and attracted the audience’s attention.  It showed the artistic imagination jump over the natural stereotype.  From now on, how about getting to know several sorts of contemporary art which we can notice both of art and science in each of works? 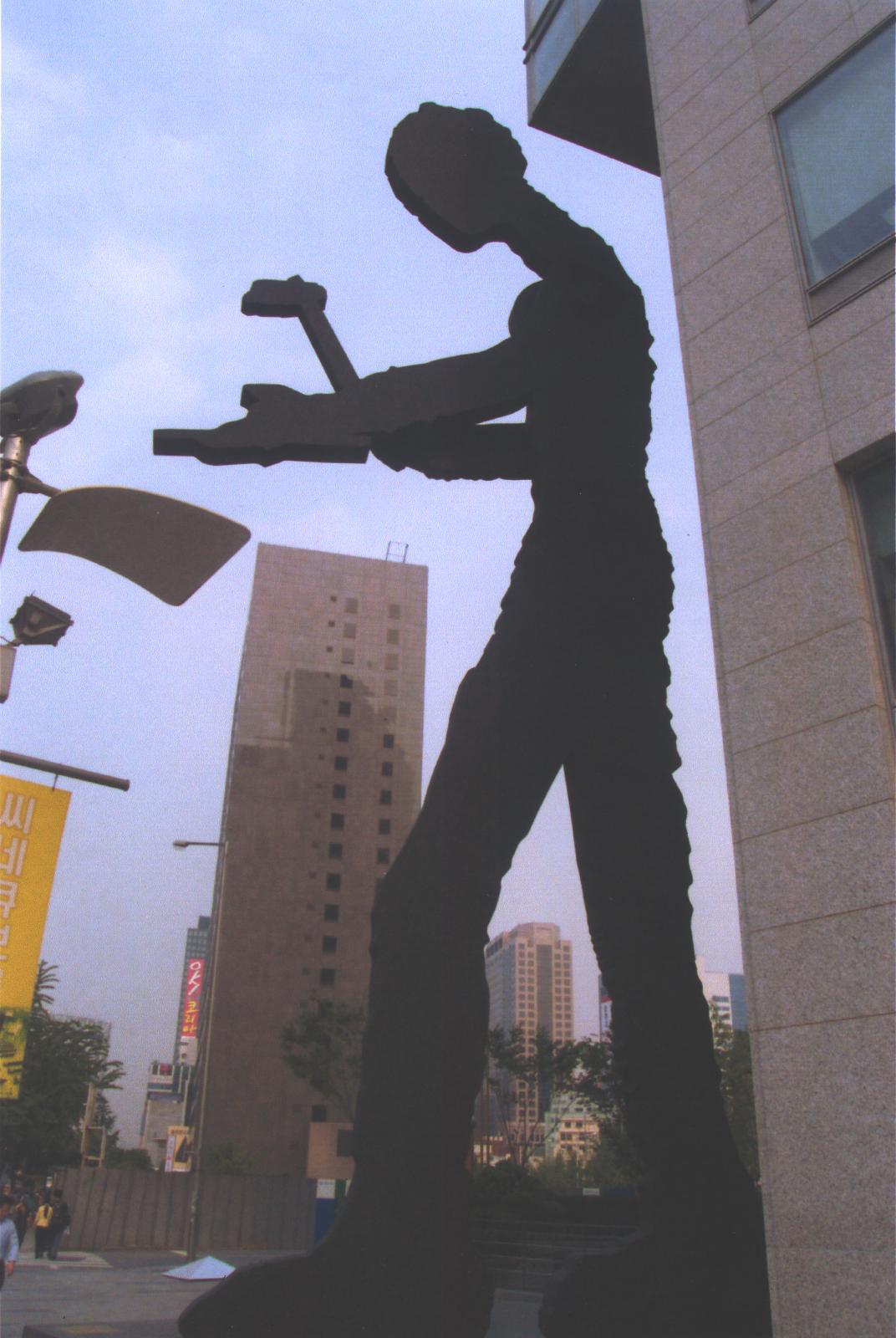 Kinetic Art does not express movement inside the work or change the optical things but it is moving art or includes moving parts itself.  According to its characteristics, it is separated into four kinds of Kinetic Art.  First, the work itself is moving.  Second, the work can be changed or moved by the action of the audiences.  Third, the work shows the movement of colors and shadows reflected on a wall or screen by using light.  Last, the work is completed or fulfilled by participant’s action to start or stop operating the work and in other various ways.

Have you seen the huge statue installed in front of Hung Kuk Life Insurance Company building near Kwanghwamun?  This statue, Hammering Man, was made by American installation artist, Jonathan Borofsky.  Its right arm and hand which holds a hammer moves up and down every one minute and seventeen seconds.  It is a good example to show us the Kinetic Art work around our lives. 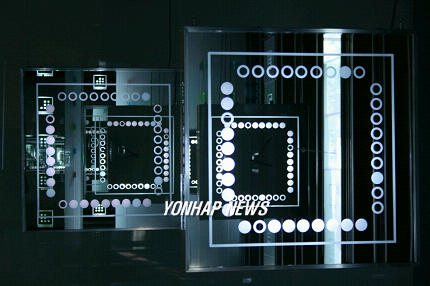 Op Art is the abstract art which makes audiences get optical illusion using geometric shapes, the law of perspective, and tension of the colors inside the work.  It is different from the constructive abstract art in that it pursues pure visual effects.  Also through the light, color, and shape, the viewer can see the dynamic and vivid movement.  However, Op Art is closer to natural sciences than cultural sciences because it’s too intellectual, systematic, and leaves a cold impression. 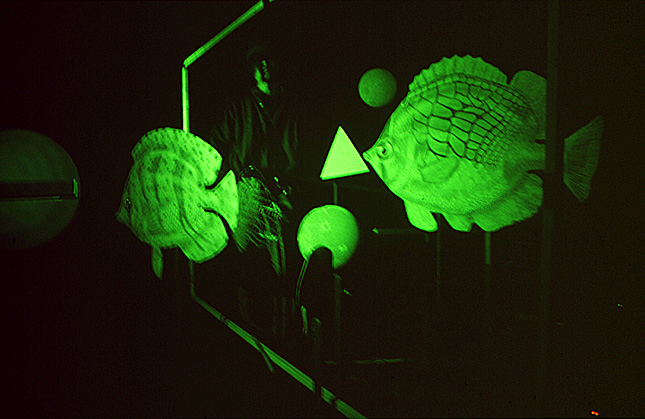 Holographic art is related to laser art.  Holographic art is created by adapting image to figurative field.  Holography makes vivid three dimensional images which are hard to distinguish as real or not.  Seeing certain objects means recognizing waves of light.  People can see the virtual image which is close to the real image later by recording the wave of light coming from objects perfectly.

The principle of holography is reproducing by using laser tool, after recording the wave of light produced from objects to holographic photo dry plates.  There is a Kim Jin-tae's work, Memory Preservatory.  It seems real shape of three dimensions; however it isn't real, because the hologram shows the object in the air as stereopisis. 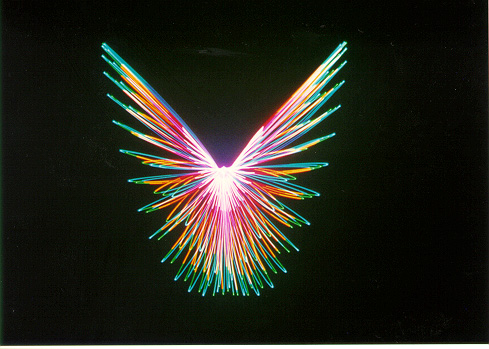 Originally, a word ‘Laser’ was taken from an initial word of ‘Light Amplification by Stimulated Emission of Radiation.’  Laser art includes art which uses light energy and lasers for numerous purposes as they are called a hero of the times made by the third industrial society.  Laser art pursues diverse expressions by bringing together powerful lasers.  In addition, this can be understood as an art expressing method which has fantastic atmosphere made by straight or wild of thin beams.

Laser as a tool emitting the high impact light having cohesive power or beam is used by artist or technologist in the field of design, sculpture and copperplate prints.  As well, it is used in making kinetic art.  There is a work its material is laser Space flower laser balloon which is Ann Kwang-jun's work.  The laser generator emits splendid colorful light and makes irregular shapes every moment in a three meter transparent balloon. 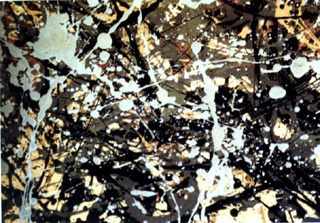 Fractal are complicate structure which repeats to infinity.  If the particulars are enlarged, it is similar figures with whole structure.  Fractal art is created by calculating fractal objects and representing the calculation results as still images, animations, music, or other media.  Fractal art is usually created indirectly with the assistance of a computer, iterating through three phases: setting parameters of appropriate fractal software, executing the possibly lengthy calculation and evaluating the product.

Fractal Art can be categorized under the general definition of digital art and more specifically under the category of algorithmic art.  Traditional and representative fractal art can be considered a sub category of Fractal Art.  Before scientists took interest in the fractal, Jackson Pollok already used it.

There is an Oh Sun-mi’s work, Fractal of Space which was made of common mirrors.  The mirrors are able to reflect objects continually and have unique characteristics which are self-similarity and recursiveness.  Though the six mirror regular hexahedron, the work could make the fractal structure. 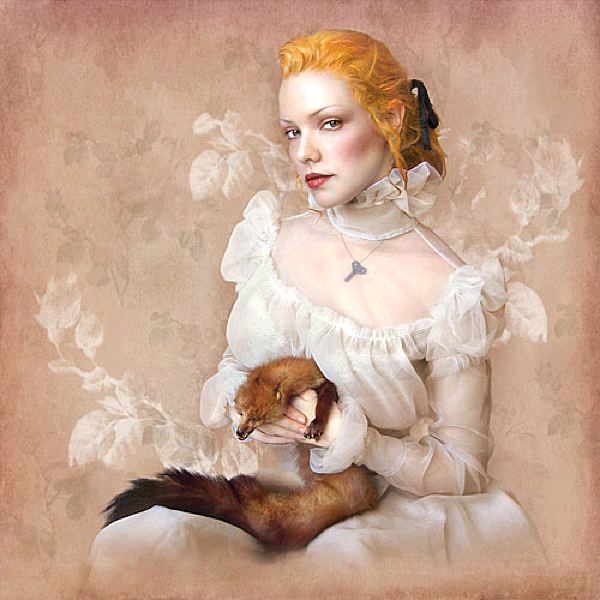 Digital art is art stored on a computer in digital form.  Digital art can be purely computer-generated, such as fractals, or taken from another source, such as a scanned photograph or image drawn using vector graphics software, using either a mouse or graphics tablet.

So, how does the digital technology intervene in the existing art form such as pictures, prints, photos, and images and changes the relation among each part of arts?  The digital technology has following aspects: segmentation and combination, repetition and unlimited reproduction, borrowing and composition, and metamorphosis, denaturalization, condensation, and modulation.  Among them, one of the digital art forms, 3D uses the third one, ‘borrowing and composition.’

3D graphics is included in the digital art which created via the process of designing complex imagery from geometric shapes, objects and scenes for use in various media such as film, television, print and special visual effects.  There are 3D works which were made by Seo Young-ho and the Stereoscopy Company.

When the audiences put stereoscopic glasses on, they could see the plain image turn into stereos.  To make the basic plain image, two pictures were taken by a stereoscopic camera.  Then, the pictures from two angles are overlapped.  In the screen, there is lenticular film which controls the sense of sight physically.  The image is shown by 3D glass which is made of a polarizing lens. 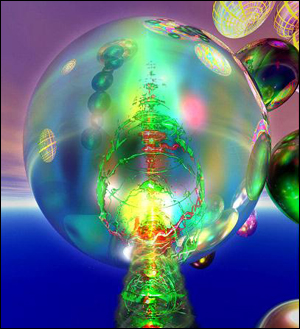 Art and science meet in various sorts of the modern art.  Now, the concept of modern art became wide and the modern artists try to create new work in different ways.  Moreover, art and science strive to develop together not as an independence part but also as an interact part, each other.  Above all, internet, one of the great networks of the information society, offers the opportunity for us to get closer with modern art.

However, there are some negative effects, either.  Works using high technology media computer and internet approaching functional and technical cause the problem.  It is because art which meets science role as an art but the functional and technical effect stand out more than art.   Also, boundary of the each sort of arts becomes ambiguity. Several kinds of art characteristics put in a work make people hard to distinguish what the sort are.

Artist's unique image or skill is worn out due to reprinting, so audience could miss something from the original works.  Walter Benjamin who was a philosopher and social critic called it is the loss of aura in his essay.  However he concluded it is not so such a wrong way.

Though lots of reproduction, the aura of the main works hasn’t disappeared.  Rather, more people are able to access the art than ever.  For example, many museums provide its works on the web page through Internet service.  Likewise, as the science technology develops, more people become intimate with art.  Though, nobody can predict the direction the association between art and science will take, the art will exist and be interactive with each scientific medium or technique.