The Sookmyung Times (SMT) made a visit to Barunsaenghwal Sandwich café and the dining room, Café Snow. The manager of Barunsaenghwal Sandwich in front of Sookmyung Women’s University (SMU) stated, “In fact, the unit cost of production of our products has risen steadily from last year. For instance, we use bread, cucumber, lettuce, ham, and so on. Therefore we cannot cope with rises in the prices of ingredients.” Also, a representative of Café Snow in SMU explained, “It is an inevitable condition that every ingredient like wheat pushes up the prices. We have no choice but to increase the price of items such as waffles.”

The global economy has faced no major inflation crises. This was due to several reasons such as the spread of the Information Technology (IT) industry, the lasting low price of oil and the economic growth of low-wage countries like . (The Hankyoreh 21/691 edition) So why is exorbitant inflation happening today?

In March, 2005, Goldman Sachs, the investment bank, released a shocking report about the rolling of international financial markets. The report predicted that the world oil price could surge above 105 percent per barrel within a few years. (MUNHWA, a kind of newspaper) At that time, a rumor was swirling in the market that the third oil crisis could arrive at any moment. When the oil shock of the 1970s hit, countries that were importing oil responded in two ways: the majority of advanced nations immediately permitted a price increase, while many developing nations started to regulate domestic oil prices. The former allowed the market to adjust to the oil crisis but the latter directly manipulated the market. Although no oil crisis has occurred this time around, the era of high oil prices has in fact begun.

Oil at 100 dollars would be the most expensive ever, even surpassing the price during the second oil shock when inflation is considered. The whole world has felt a sense of crisis and stock prices around the world have started to fall. The shock of high oil prices would be especially hard on , which has no domestic oil production. According to the Bank of Korea, for every 10 percent hike in oil prices, consumer prices rise 0.2 percent and the economic growth rate slows by 0.2 percent points.

Raw Materials To Go Up

Prices have been rising continually. From the second half of the year 2006, grain costs have been increased high, persistently and continually in food prices. It is imposing problems around the world. The price of wheat exceeds 400 dollars per ton. The Economist magazine warned that “The era of cheap food that lasted over the past 30 years is over,” in a report. They added, “There is an increasing danger of agflation worldwide.” (www.sunday.joins.com) Agflation is a compound word, which mixes ‘agriculture’ with ‘inflation.’ The newly-coined term describes the recent form of inflation which is driven by the steep rise in food prices worldwide.

International grain prices were skyrocketing 298.44 dollars per ton, increasing 125 percent on December 2007 from 132.66 dollars on September 2005. The price of rice is approaching its 20-year peak, corn prices have also doubled in just two years, standing close to the highest price in history. There are two reasons why the prices of crops have been skyrocketing in recent years. One is that the huge population of China and India are getting wealthier. The consumption of edible grains is proportional to the growth of population on the whole. The more wealth underdeveloped countries become the more economic problems the world has to go through. This ratio has not seen many changes over the past few decades; however, ongoing economic booms in China and India have prompted a rapid increase in the consumption of meat. For a few years, consumption of flesh and meat has been on the increase, by an annual 0.82 percent in advanced countries and 2.38 percent in developing countries. Since 1975, consumption of pork has jumped 7.9 times from 7 million tons to about 55 million tons in China. Since 1990, consumption of chicken has increased 10.5 times from 190 thousand tons to 2 million tons in India. (The Hankyoreh21/691 edition)

U.S policy is a crucial reason, too. An official at the Bank of Korea said, “The other culprit is the bio-energy policy of the United States-perhaps the most crucial reason.” Large quantities of edible and feed corn have been converted into fuel, encouraged by the U.S government, and the change is happening rapidly. Increasing oil prices has an effect on agriculture. Additionally, land used for other crops such as rice or wheat is also being given over to fields of corn. Corn has been used especially as feed, so it is affecting prices of stock farm products. Mexico, where corn originated, is having a hard time because of the sudden rise in the price of corn, too. In spring last year, about 120,000 people gathered to protest in the center of Mexico City . During the past year, the price of a tortilla, which is the staple of Mexicans, has risen to three times its original price. That is because it has gotten hard to secure the cheap American corn that had been imported ever since the two countries signed the North American Free Trade Agreement (NAFTA).

The shortage is not due to a bad corn harvest. It is because of the Bush government’s bio-energy policy planning. Refining fermented corn makes ethanol. When it is combined with gasoline, ethanol can be used as fuel for automobiles. With bio-fuels factories and gas stations increasing in great numbers, the price of corn is climbing fast, too. The demand of corn is higher than the production. In an effort to meet the national demand, the amount of corn exports has decreased greatly. So, Mexicans, who have been a great beneficiary of NAFTA for the past 10 years, are demonstrating and calling for a renegotiation of the deal. Mexicans are not the only ones having a hard time. (The Hankyoreh21/691 edition) The Japanese, across the sea, are also affected by the bio-energy boom. Livestock farms are closing due to the high price of feed. There is no need to mention that the price of pork and ham has also risen. Besides corn, the price of other grains has also risen. That is because most farmers have switched to growing corn because they can earn much more, so the production of other grains has declined. The aftermath of agflation has been already making a rush toward dinner tables in Korea, too. Cho Sung Jong, Director of Center for Economic Policy Analysis, said, “Korean agriculture has been spending energy like a plastic greenhouse. Rising of international oil prices has a big effect on agriculture.” This is that agflation in is related with change of international oil price.

Metal price is rising, too. Air-conditioner fans, steel ropes in mountain paths, guardrails, wire nets and steel items that can be sold are a target. Such news is not surprising information anymore. That’s because the price of metal items such as steel, aluminum and zinc has skyrocketed. A man of a recycling organization said, “The price of steel jumped five times compared to 5 years ago.” (www.sunday.joins.com) The price of copper is four times the price in 2001, the highest ever. One major reason is the construction boom in China, with the Beijing Olympics and Shanghai Expo coming up. Experts of economy predict that the problems do not disappear easily. That’s because the ever-increasing speed of the demand coincides with the exhaustion of metal resources. Gold, silver, zinc and tin will likely run out in just 15 years. Other resources are also limited, so recycling is the only alternative.

A Rise in Exchange Rates

Exchange rates have been continuing to rise steadily. “The won’s depreciation will directly lead to higher inflation,” said Chang Jae-Chul, a senior researcher at Samsung Economic Research Institute. He continued, “It will affect every import, including petrochemical products and grains. Experts analyzed the reason of the rise in exchange rates. They explained, “The won fell because foreign investors converted proceeds from sales of local stocks, as well as dividends paid by local companies, to dollars.” However, a rise in exchange rates is not always negative. When it comes to Korean exports, there are some positive conditions. The more exchange rates increase, the higher the price of imported items becomes. In other words, the won’s depreciation makes exports relatively cheaper than those of other countries, which generally makes exports less expensive. “A rise in exchange rates can help correct the imbalance of international payments. It can be positive that business is picking up,” said Cho Sung-Jong. After all, the won’s decline may be predicted to continue, at least for the short term, and it is already near rock bottom. However, experts suggest that the recent pace of the won’s decline cannot last long.

Predict the Future and Discover a Breakthrough

Anticipating the future and finding a breakthrough might be classified into three parts. First of all, policy. Cho Sung Jong said, “It can help price stabilization if a central bank adopts a retrenchment policy like a rise in interest rates or a lowering of exchange rates.” He continued, “However, this condition does not demand full inflation which happens when aggregate demand exceeds aggregate supply. Inflation occurs when the cost of items like imports is raised. Therefore, currency policies that hold back aggregate demand cannot be a fundamental breakthrough. A lowering of exchange rates might create trouble, too. Because a rise in exchange rates can correct the imbalance of international payments, a central bank cannot consider only the prices as lower in exchange rates. That’s why they have to deliberate on the national economic condition as a whole.” Lowering taxes such as oil products as well as lowering exchange rates can bring benefits, lessening the burden on the public. Second, the government must import less expensive items. In fact, acquiring a safe supply of resources and developing an alternative energy source are all issues for government. Cho said, “Combining the projects of developing new oil fields and developing the technology of alternative energy can be ways to overcome rising prices.” He suggested, “However, these are long-term devices.” Thus, government policy alone doesn’t have enough strength as the means to stabilize prices. Third, the consumer has a part to play. Consumers need to hold back on their spending. Cho explained, “Consumers should save energy every day, while businesses should concentrate on developing more energy-efficient products to survive in these changing times.” He added, “Lowering wheat consumption and raising rice consumption can help stabilize prices. Also, it can help create price stabilization to manage household economy appropriately.” 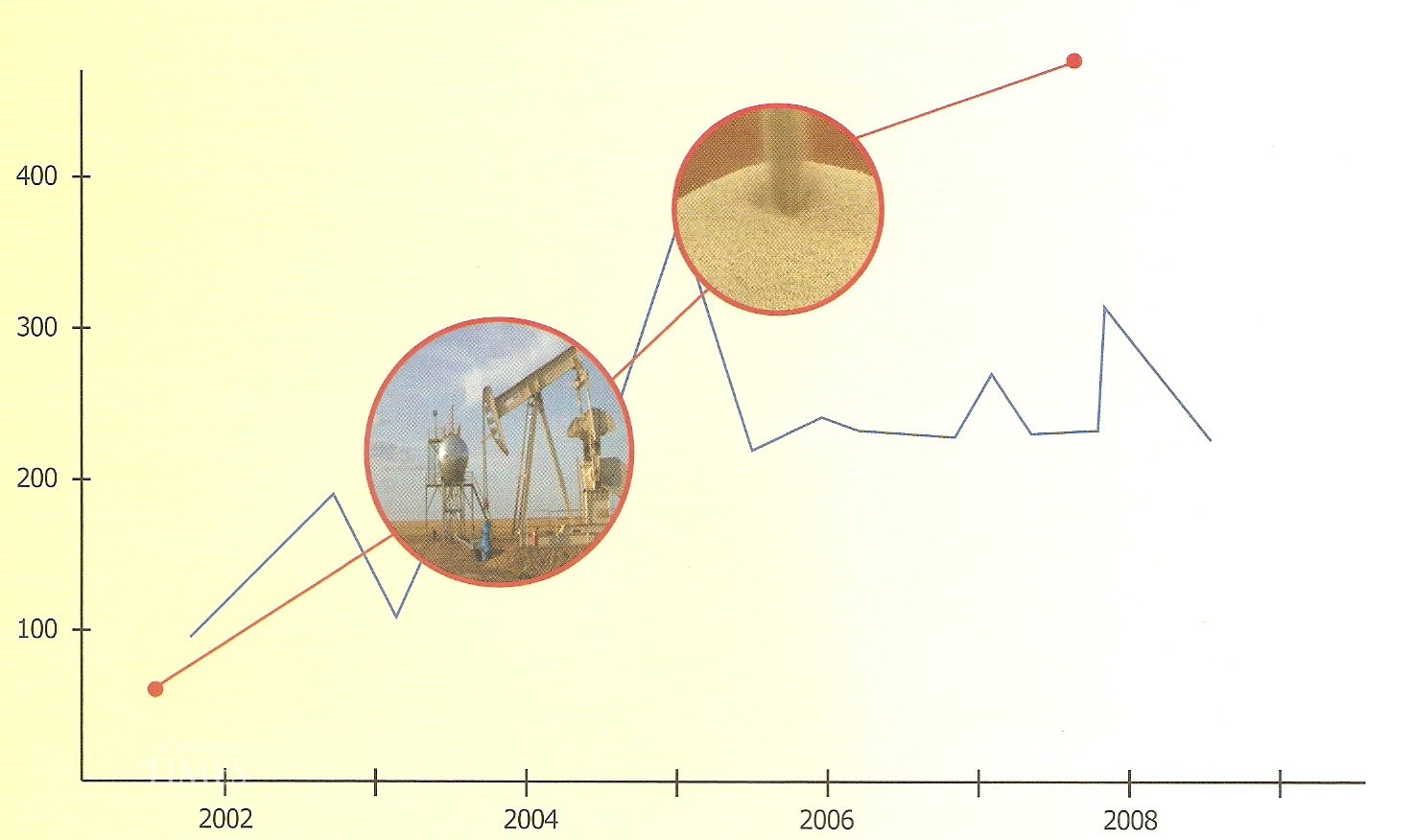 A Rise in Exchange Rates