ALL PHOTOS FROM SEO

From elementary school life to university life Seo Cheon Seok’s (SEO) dream has continued to change, but becoming a social worker had never been her dream.  However, now she is the representative of the Good Shepherd Foundation which is ranked in the top 5 foundation for disabled people and made a Seoul rehabilitation center for the visually handicapped.  Also, she founded a large welfare house in Gapyeong for severely disabled people.  The Sookmyung Times (SMT) met SEO to ask what makes her change.

When SEO was a freshman she dreamed to be a professor. It was a continuation of her elementary to high school life.  However, there was an event which made her to turn her eyes to broadcasting when she was a sophomore. There was a ‘KBS University Broadcast Play’ and SEO was selected as MC.  After the play, producer Lee Bo-ra told her that she should be a main character, so she played lead role in her third year, and got a best actress award which was given to just five people.  Throughout this SEO thought that she had ability in broadcasting, so she decided to be a broadcaster.  Finally she joined MBC as a rising star announcer after she graduated SMU.  However, life was just not in her control.  She suffers from Behcet’s disease, which caused her to go blind, forcing her to resign.  After resigning, SEO thought there was nothing to do in her life, so she decided to kill herself. But one eye doctor’s words made her think about her life once more.  He said, “Why do you think you should treat your illness with just medicine?  You can treat it with your mind.  Going to church will help you control your mind.”  So she decided to go to the church and also she studied in Seoul Theological Graduate School with a lot of efforts like writing a note with a felt-tip pen to see it easily. 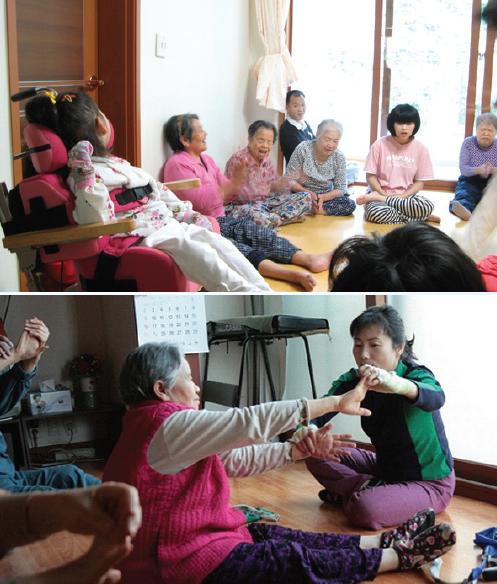 After she graduated from Seoul Theological Graduate School, she made a church for blind people because most churches were not open for disabled people.  Before long, in 1971, United World Mission (UWM) came to Korea and she helped them to do welfare mission work, and 5 years after UWM asked her to join the Korean Chapter.  In UWM she learned about welfare by connecting blind students to sponsors in the U. S. A..  She also helped blind students by brailling service.1  It was very hard work because just 15-20 pages of document increases to about 50 pages when translated into Braille, but she endures it to help students.  Lastly, by newly blind rehabilitation training, she has not only helped others but she helped herself, too. 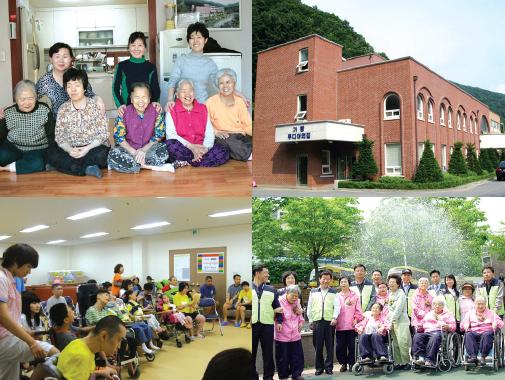 In 1990, UWM left Korea and missionaries gave all UWM things to SEO; therefore, SEO made ‘The Good Shepherd Foundation,’ and got support from the government.  However, her dream was not to make a foundation but to make a nursing home for disabled people.  Since 1970, SEO dreamed this, so for 15 years she saved money with other blind people and started Lydia House.  While living in a small house she dreamed one more thing: making a big nursing home for disabled people in a site of beauty.  At the end of her 30 years of desperate prayers, she could achieve her dream in 2007.  Someone donated huge land in Gapyeong, and she built a nursing home with permission from the government.  After building dedication ceremony, SEO said, “I have visual impairment, but I don’t get frustrated.  I achieved all the things that I can achieve.”

“I graduated from the Department of Korean Language and Literature in SMU, and I earned my wings in broadcasting.  However, I have no choice but to give it all up because of disease.  I attempted suicide but the eye doctor gave me a chance to live my life again.  Throughout this life, I have never been greedy to achieve something, but I just do my job quietly.  This was all the things I’ve done to achieve my dream.  ‘To achieve a dream is like a pyramid.’  There are many things to do first, but it is the process to achieve your dream.  Maybe it will take a long time, but do the given tasks.  Then your dream will come closer to you.”