Give a Light on Dying Cartoon
상태바

2009 was the 100th birthday of Korean comics.  For more than 100 years, Korean comics have made many changes to survive.  The greatest change was when comic books became webtoons.  However, Korean comics are still in trouble, so many people are looking for a way to grow the Korean comic industry.  What can be the way to develop Korean comics? 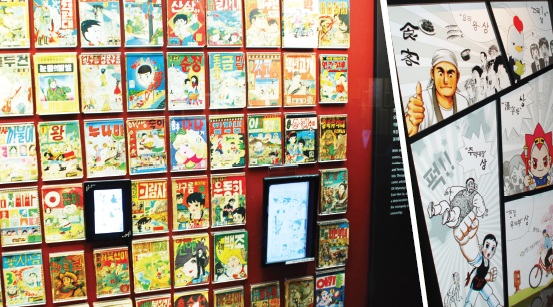 Comic, It Was the Most Enjoyable Thing

When comics first appeared, it was just a story book for everyone in Korea.  With movies, comic books were part of popular culture.  Not just children, but also adults enjoyed the comics.  Therefore, comic book shops appeared and people could enjoy comic books easily.  At that time, people loved and joyed to read comics.  For example, Lee Chang-Ho's Baseball Team (*Gongpoui oeingudan), Run! Hanie!, Rayphie were the most popular books.  Many comic books stories were about sports or humanism, and this made men and women of all ages enjoy the comic books.¹  But as time went by, comic books popularity faded.  One of main reasons is that the stories of comic books had changed.  Too many Japanese comic books penetrated the comic market in Korea and lack of criticism of comic books made Korean comic books go backward.  Rhie Won Bok, professor of Duksung Women’s University, said “Lots of sexual and violent stories are a problem of Korean comic books.  To be a pop art media, studying about comics is needed.”²  This made more people avoid readingcomic books than before.

Their Way to Survive 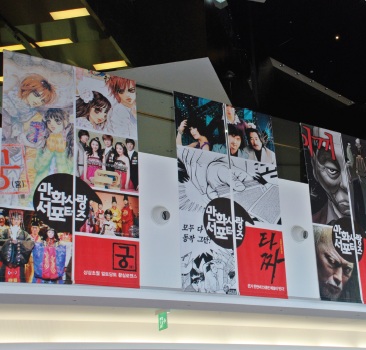 However, with the birth of *webtoons, Korean comics have changed their style once more.  Starting with Papepopo Memories, comics used usual stories of modern people, and this made people to feel sympathy with comics.  Kim (21), Division of Law of SMU, said “I think sympathy is a key to webtoons’ popularity.  Prestigious Private High School Jungle for Entrance Exam is my favorite webtoon because I vibe on the story.”  Moreover, webtoon Gangpul’s I love you which deals with elderly love was touching to people, and these things made people to give attention to Korean comics once again.  People used comics as drama materials, and also they made products with webtoon characters, and this attracts other countries’ attention.  Therefore, the Korean government started to use comics for cultural exchange.  For example, in 2011, governments engaged in glocalization of the Korean comic project for Central and South America with The Asia Pacific Women's Information Network Center in SMU.  Furthermore, comic Muryeong, set in Paekche exported to Thailand and gained great popularity, and Gangpul’s Romance Comics made a great hit in Japan, too. 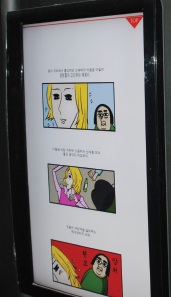 In the past, comics were enjoyable thing that everyone could enjoy easily, but similar stories because of excessive influence by Japanese comics made people sick of Korean comics.  However, with the webtoon market, Korean comics have found a way to survive.  They started to use sympathy stories that everyone can easily accept, and this made not only Koreans but also foreigners to take notice of Korean comics.  Now comics are not just enjoyable contents.  It can be important material to introduce or promote Korea to other countries.  For example, Japan improved their image through the comics Naruto and Onepiece.  Cartoonist Kim Bungsu said, “Communication and sympathy is a key point to increase the value of Korean comics.”³  Now, Korean comics are upgrading with sympathy.

As webtoons could be a hope of the dying comic markets, sympathy can be a way that Korean comics can survive in the international comic market.

* Serial comics which published in the Internet