Drawing Our World on Screen
상태바

We watch films in theaters, as visual aids in lectures, or at home.  Yet, have you ever thought of making one?  There is a group of passionate activators who are making films themselves and holding their own film festivals.  The Sookmyung Times (SMT) met the club’s representative Yun Jinyoung and Lee Eunjeong (KUFCA) to learn KUFCA’s free spirit and hear their thoughts.

SMT  KUFCA runs its own film festival.  As many film festivals held around the world have their unique traits, does KUFCA also have its own special feature?

KUFCA  The KUFCA Film Festival’s biggest trait is that the festival itself and the movies screened in it are planned and produced by those who haven’t learned expertise in this field before.  The 1st film festival held in 2011 was possible thanks to representative Bang and the students who volunteered from each university.  The 1st festival’s theme was KUFCA 1031, and universities took one letters each and produced films based on it.  If the first festival
was to strengthen the unity of KUFCA, the 2nd festival was for every person, inside and out, who loves movies to participate.  In the 2nd KUFCA Film Festival, each club paid hommage to famous Korean film directors’ work.  We are newly selected as co-representatives and are getting ready for the 2013 KUFCA Film Festival in September with ingenious subjects.  We hope to meet many audience members who love films.

SMT  What is the privilege of being a university student while producing a film?

KUFCA  Since KUFCA is a group of non-science majors, we might not be professionals, but we are not locked up in a particular frame.  Therefore, we could imagine freely and try anything.  Also, university students’ films are often not following the formula of the box-office or trapped in a certain philosophy.  As a result, anything we could see or experience that anyone could go through becomes the movie’s material.  So the university students’ films can induce familiarity and show creativeness and imagination at the same time.  The privilege of filming as university students is the opportunity to draw their own world without being chained to things such as money and society’s values, which results in originality and creativity. 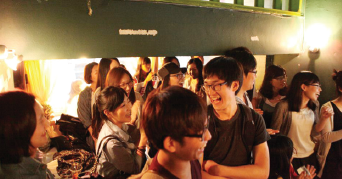 SMT  KUFCA is a club that unites each university’s already formed film clubs.  It seems there was a reason for combining already formed groups into one.  Could you tell us the background story?

KUFCA  One company manufacturing alcoholic beverages supported university’s film clubs and shot an advertisement for a paper in 2010.  This provided a chance for five filming clubs at universities in Seoul to get together for the first time.  After the shooting, we had an after party, and a suggestion of having regular meetings to exchange information and promote fellowship was made.  That proposal served as a momentum of associating KUFCA and it was established on October 31, 2010.  The main reason for our gathering as KUFCA is to maintain a central club and share information.  Currently, 16 universities are participating with us.