While you laugh at a well-dressed awkward couple on a blind date, sitting in a restaurant not saying a single word, you secretly realize that it could be you in that seat in the future.  For all-women’s university students, blind dating is a requirement course for anyone before graduation.  Yet it is a natural campus tradition to have these unnaturally random meetings.  Could this be a universal tradition?  Let us listen to what the exchange students at SMU have to say about the dating cultures of their countries. 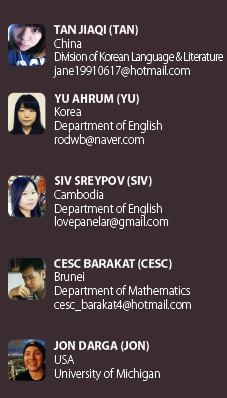 SMT Do you have blind dates in your country?

SIV  No. We never meet a stranger under the condition of an instant relationship.

CESC  Sometimes we date classmates or approach someone to ask her phone number, but we do not have blind dates.

JON  A lot of people don’t like blind dates and only go on them when they feel like they “have to” (ex. They’re not meeting anyone “normally” and really want to be in a relationship), but we definitely have them and people do often go on them.

SMT When looking for a date, what is the most crucial standard in your country?

TAN  Probably personality, appearance, and income. In our country today, there are many only-children who have received an infinite amount of affection from their parents.  Thus, the standards are ever more increasing, especially regarding income, houses, and cars.

SIV  It differs from people, but it could be said that personality is the most important.

CESC  Mostly religion.  After that, maybe ‘education-money-appearance’ is the following order in importance.

JON  It really varies person by person, but I’d say generally the first consideration is appearance.  Then after that, personality is a very close second.

SMT How are the date expenses paid for?

TAN  At first, the men pay for all the expenses, because in my opinion of their pride.  After a few meetings, the women start to pay a portion to lessen the pressure on the men.

YU  If both male and female are students, because of their economic burden, usually the man pays for the meal, and the woman pays for coffee.  Sometimes men pay for everything, and sometimes each partner pays an equal amount.

SIV  In Cambodia, we pay together or we take turns.  However, I think men pay a little bit more.

CESC  Men usually pay for the expenses, because it makes us look gentle.

JON  The male usually pays for the date events.  It’s usually a polite way to say that you’re not interested in a second date if the female offers to split the bill.  It’s basically a carry-over from the days of masculine chivalry.  Those customs are slowly becoming less and less important.