Passion, the Energy I Run On
상태바

If asked to name a female scientist, whose name would first come to mind?  You may think Marie Curie, the well-known scientist who won the Nobel Prize twice.  Would any Korean names come to mind?  Can you name any female scientists?  Most of you might think that there are few well known Korean female scientists.  However, in 2014, one female scientist uncovered the protein aggregation related to human diseases.  Also, worth noting is that she is a professor at Department of Chemistry at Sookmyung Women’s University.  April 21st is Science Day, so the Sookmyung Times met professor Ham Sihyun who was awarded Female Scientist of the Year 2014 to learn more about her vision and life.

In 2012, you reported the process of protein aggregation related to Alzheimer’s disease.  Also in 2014, you uncovered the cause of that protein aggregation.  As shown in these two achievements, your research has proven essential to the understanding of human proteins.  Chemistry offers one an opportunity to follow many research paths.  Why did you choose to concentrate your effort on researching the proteins?

After I got my Ph.D degree at Texas Tech University in 1998, I went to University of Washington, Medical School in Seattle.  At there, I, as a postdoc researcher, started to work on the proteins related to diseases.  After I came back to Korea and started my own research group at Sookmyung in 2003 as a faculty in chemistry, I wanted to pursue more on protein science, especially related to human diseases by using super-computers.   Personally, my father suffered from Alzheimer’s disease so I was curious with incurable diseases.  During the early days of my research, I wasn’t sure what research I could do as a Chemistry researcher.  However, in the end, I got good results.

Can you give some brief information about the recent research?

My research is about the new way of showing the cause of the protein aggregation related to Alzheimer’s disease.  All around the world, many scientists have been researching, ‘how to solve the problems related to protein aggregation,’ so they can find out the fundamental cause of that and make a technology to handle this problem in atomistic level.  Most of the research was concentrated on the protein itself but it still had a limitation.  Our research team focused on the environment around the protein and thought that maybe water does the important role on the protein aggregation.  So by using the technology of accurately estimating the interaction between protein and water that the team has been working on, we could estimate about 90% of the aggregation.  We were surprised again that water does this important role. 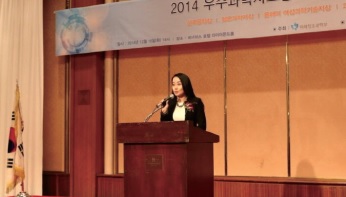 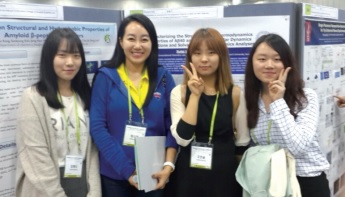 Research is surely a difficult job.  Did you ever encounter any difficulties along the way?  How did you overcome those difficulties?

Actually, I don’t recall any hardships.  Of course, I suffered defeat when my results were not as I had hoped or wanted or took long than expected.  I cried at the lab many times.  However, I knew this was the path to success.  I always kept the thought that if I keep working, the result will eventually come.  In addition, I enjoyed my work.  The process might not have been fun when I failed, but when success did come, my results gave me an overabundance of joy to endure.  Rethinking my days, that’s probably the reason, I easily overcame any hardships and didn’t consider them a huge problem.  I think I was born full of energy and I usually get refreshed after attending an overseas conference.  Some may say conferences are stressful, but I feel refreshed listening to talks at them.  I enjoy challenges and think about my goals after the challenge is done.  Seeing my goal ahead, I feel energetic.

In your opinion, what is the best temperament a scientist needs to engage in research?

There are many important things, but if I have to choose just one, it would be honesty.  Though you fail over and over, it is wrong to alter or modify your data results.  A scientist must accept the data as it is produced.  Besides honesty, a scientist should be confident, passionate, and willing to do research.  When a scientist is curious about a certain situation and wants to know why, research is the best means of finding a solution.  However, as I just mentioned before, results are not typically what one wants.  At that time, it is important to endure and not give up during the research process.  One must believe in themselves and that the future holds the results you desire.  Sometimes, when students say they want to become a person like me, I emphasize that there is no free charge.  New theory or new results are not easily accepted but I always want to say the importance of curiosity.  I want students to work on scientific research with curiosity and passion.

Where would you like to be in 10 years from now?

10 years later, I might not be as energetic as I am today.  I may need to take it easy, but I still hope to be working as a professor.  I hope to continue chatting to students and discussing their problems comfortably.  As a researcher, I hope to continue my research on proteins because there are still many unresolved diseases.  I dream of finding a cure for incurable diseases such as mad cow disease, Parkinson disease, cancer, and diabetes.  Like what I’ve said at front, I want to make results that would help cure of incurable diseases.  More than that, I want the whole country to live much better than now.  My greatest hope, thought, is that I am the same person I am today.  I am very satisfied with my life, so I want the future to be same as today.

What would you like to say to Sookmyungians as an alumnus and as a professor?

Life at university is the last chance you will have to make mistakes.  In the past, I made many mistakes, so I once thought I didn’t want my students to make the same mistakes as I’d made in order to mature as better and more advanced persons.  However, if you have a dream, do not give up on that dream.  The road may be hard and you may even want to give up, but remember I will be there to help you.  I want to give the ‘gift’ I received when I was a university student.  If you don’t have a dream, come to me.  We can talk about your future and I can help you find your way.  I think of Sookmyungians first.  If a student comes to me for help, I will always be ready to assist.

Finally, what does Sookmyung mean to you?

To me, Sookmyung is my life.  At the entrance ceremony for our 2015 frosh, I said to them “In Korea, there are only two universities: Sookmyung and all the rest.”  Sookmyung is a place that teaches students gentle leadership and that drives the dreams and visions of its students.  When I was a student and when I didn’t know what to do, my professor advised me to study abroad.  Following that advice, I eventually found myself as a professor of Sookmyung.  If I had gone to any other university, I wouldn’t be here now.  In addition, Sookmyung is a place filled with love.  When I get awards or something good happens to me, everyone at Sookmyung congratulates me.  When I was a Harvard professor, I often told Harvard students that Sookmyung is the best university in Korea.  Also, when I meet other professors from foreign countries at conferences, I always speak highly of Sookmyung.  I am very cautious of not making any actions that might ruin Sookmyung’s image.  I continue my work today as a proud Sookmyung.