Don't be under Others' Control!
상태바

What is your dream?  There is a person who answered “Announcer” to this question for over ten years.  She hosted a festival of universities in front of many people when she was only in middle school.  Thirteen offcampus activities in two years, the youngest successful applicant for open recruitment of SBS announcer, and a model of Sookmyung University—those are words that come before her name.  As you imagine, she is Jang Yewon (Jang), who became an announcer of SBS (Seoul Broadcasting System) in October.  The Sookmyung Times (SMT) met Jang, who wants to be a “Wannabe Announcer.”

SMT  According to the news, you prepared for open recruitment of announcer not at an academy for announcers but in SMU.  How did you prepare for the test only in school?  And what was your campus life like?

JANG  I prepared the test at Myung- Uhn Jae.*  There are various programs which are conducted by Myung-Uhn Jae.  I trained in school because I felt there was not that much difference in education from school to academy, and I was a member of the leadership group ‘Ambassador.’  The reason why I chose to be an Ambassador is the program might be helpful to practice for being an announcer.  Every Saturday, we give a speech in front of people, and I could experience being an announcer beforehand.  Also, not only could I learn how to give a speech, but I also learned how to treat adults politely.  When I think back, I got a lot of things from SMU.

JANG  When you write your resume, you should write as specifically as you can.  If you were a team leader and your teamwon a prize, you should not stop at writing only that fact.  You should describe in detail the problems that your team faced and the ways how you solved them.  Also, if you want to show your activeness, don’t stop at just saying, “I am active. ” Show examples that others can agree with.  And at the interview, you should show the will that you really want to do that.  Smile and smile even if you tremble.  In case of off-campus activities, interviewers select students who will work well with them, so they focus on a person who wants to work with them at the interview.  It is a good idea to think inversely, how you can be a person who they want to work with.

SMT  Students do at least one or two off-campus activities in a year.  When you prepared to be an announcer, are these specs really helpful?

JANG  I don’t think you should be fussy at doing a lot of things to add as specs.  Because these days a lot of companies erased the box which was about experiences of off-campus activities or studying abroad, specs are not the thing you should focus on.  The reason I did diverse activities is to develop empathic abilities.  I thought that if I become an announcer, I would meet and talk with many people, but when they are talking about things that I experienced before, I can sympathize with them.  Then there are more things to talk with them and I can draw more from people.  That’s why I did various off-campus activities, not for getting a job.

SMT  In a case of announcers, they go to diverse fields including entertainment, sports, and current affairs.  What kind of announcer do you want to be?

SMT  It is really rare to get a job before graduation.  It might not be easy to prepare for a test while taking classes in the university.  Can you tell about the difficulties you faced when preparing for a test, and how did you overcome them?

JANG  A test for becoming an announcer has seven steps, including camera test, news reading, and a camp for a test.  Every weekend, I took a test, and on Mondays I had to go to school as usual.  It was really hard for me.  Because I had to take midterm exams and final exams, I could not skip classes.  I got an IV (It is called Ringer in Korea) before a camp for a test.  However, when I go farther step by step, I desired more.  And more, and especially when I did not graduate, most people around me said, “It might be impossible to pass the test at once.  Test as an experience.” But I had a dream of becoming an announcer for over ten years, and I stayed up all night to prepare for the test; I did not want to regard this test as just an experience.  So I made an effort to pass the test just at once.  I kept reminding myself not to be under others’ control because I was sure about my dream.

SMT  What does Sookmyung mean to you?

JANG  I love Sookmyung so much that I worked as a member of Ambassador and also I acted as a model of Sookmyung.  And I think Sookmyung really helped me to be an announcer very much, so I want to give this back to juniors.  I really got a lot of contacts through Twitter and Facebook.  And if there is somebody who says she is from SMU, I reply unconditionally.  So I really want them to contact me whenever they want help from me. 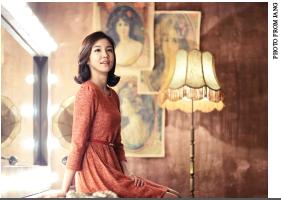