Just from the following description, guess the person!  First, this person is from the port city, Malaga, Spain and was a cubist in France.  The person had seven wives throughout his life.  Sometimes, he sketched nude models.  Also, the artists drawing of a white pigeon led to it becoming the symbol of peace.  Moreover, this person was also an illustrator, providing the illustrations for several great literary works.  Finally, here is the last hint.  The artist drew Guernica, the Young Ladies of Avignon, and so on.  Most people by now have guessed it is Pablo Picasso.  People are generally familiar with Picasso’s paintings, not Picasso, the person.  Then, what was Picasso, the person, like?

Pablo Picasso had never-cool-off heart.  He fell into true love a number of times throughout his life;  he had seven wives.  His works depict two of them, Francoise and Jacqueline. Picasso fell in love and stayed with Francoise,  who was a typically beautiful woman of the times,  for a decade.  She was his muse,  providing him with great inspiration.  He described her expressionless face well with planarity and frontals.  Meanwhile, J acqueline was also the other muse,  and Picasso often drew her profile,  showing her beauty in great detail.  Jacqueline’s face and coy sorrowful expression stood out against Francoise’s.  Are you now wondering what these ladies look like?  At the end of the exhibition here in Seoul,  the exhibitions presents photos taken during Picasso’s life.  Among the photos are shots of the two women;  thus,  you will remember them once you have come to the end of the exhibition and leave for home.

PART #2
The Study of Humanity

Picasso constantly studied human form of all ages from wee babies to the deceased.  Especially, he expressed his interest through drawings of both men and women and in particular via his nude portraits.  Isn't it shocking to hear that a great painter like Picasso would do sketches of nude models? When we think of nude drawings, indecent images of people with voluptuous beauty spring to mind.  However, to Picasso, these types of drawings show life, desire and satire.  In addition to drawing his seven wives, he drew other women he felt were idealistic models, transcending the times.  Meanwhile, when drawing men, he drew various portraits.  He even drew portraits of his companions such as Tolstoy.  These drawings are difficult to understand and can be uninteresting without knowledge of their intent.  However, with proper understanding, one can feel the affection Picasso had towards humanity.

Picasso was affected by Cezanne, and left still-life paintings that transcend the perspective.  He sometimes drew an owl, given as a present, and made it as an engraving.  In addition, he loved nature, especially flowers and toads.  He rarely merely drew things that bore no relation to reality.  He had great interest in society, and he once joined the Communist party, observing Europe, stained with war and political concerns.  He wanted to resist was art; therefore, he expressed his ideas through nature.  In the process, he often drew a pigeon praying for peace, which is now the worldwide symbol of peace.  The symbol appears in more than one of his drawings of animals, which are more than just works of art.

Is it odd to claim Picasso a book illustrator?  ctually, he drew many illustrations for various literary works such as Carmen and Metamorphoses Ovidius.  Although his illustrations are not that well-known, they are considered great achievements by Picasso.  William Lieberman, the person in charge of engravings and drawings at the Museum of Modern Art in New York, highly praises his illustrations:  "These are the most respected books of that era."  His illustrations lack fanciness and masterpiece-like appear, and some visitors are heard saying,  "They look like scribbling on paper.  I could draw that."  However, these responses are deplorable, showing today’s narrow point of view.  The illustrations are paradoxically realistic and reflect sentiments of the times such as nervousness and anxiety.  Therefore, this section of the exhibition is an opportunity for people to realize that not all masterpieces are fancy or stunning. 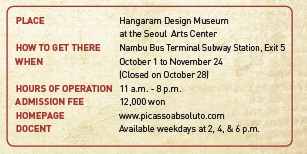 As the phrase, Picasso from Malaga, Picasso Absolute indicates, this exhibition shows collections from the Picasso Foundation.  There are scenes of his hometown and of the place where the foundation is located.  There are displays of old posters used to publicize the foundation and photos of Picasso taken during his life.  Like this, this exhibition is not a typical Picasso exhibition.  Picasso once said, “An idea is a point of departure and no more.  As soon as you elaborate it, it becomes transformed by thought."  Thus far, people have focused on his elaborated works.  From now, how about showing concern for Picasso the individual, by examining his life stories, full of ideas?