Should Major Subject Lectures be Offered in English?
상태바

In 2011, four students at Korea Advanced Institute of Science and Technology (KAIST) committed consecutive suicides because they could no longer afford the school fees nor adapt to lectures given in English, which inhibited good grades.  After the suicides, there were fierce social discussions about the effectiveness of teaching major studies in English.  Many students and professors, who opposed English-taught major subjects, said English lectures did not benefit students because it was too hard to comprehend major subjects in the English language.  It would be more beneficial if course subject matter were provided in Korean except for majors in the English department.  However, many universities have continued to increase the percent of English-taught lectures because administrators believe it will raise students’ global ability.  They insist students become accustomed to studying their major in English because they are living in a global society; i.e., they need to be able to explain their major in English.  The increasing number of foreign exchange students is another reason for the increasing number of English-taught major subject lectures.  Thus, the Sookmyung Times asked Sookmyungians their thoughts about learning major subjects in English. 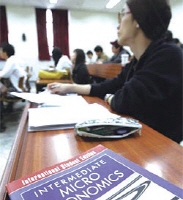 Major Subject Lectures Should Not be Offered in English

Almost every university emphasizes the vision of being ‘global,’ and they focus on raising students’ English ability by offering English lectures.  However, there are a lot of problems due to these English lectures, especially major subjects taught in English.
If major subject lectures are offered in English, the problem of poor understanding and communicating of knowledge to students arises.  For example, a student who majors in Korean Language and Literature must learn about the origin of Korean, also known as Hangul, how the alphabet letters are combined to form words and sentences, and the beauty of the language as passed through Korean literature.  Each language has its own unique cultural background, so teaching a culture other than English in English makes no sense because English cannot deliver the true nuance of Korean words.  Likewise, there are many majors which do not require students to learn in English.  Moreover, learning in the English language causes confusion among some students as they are unable to fully understand their subjects.
Also, not many students are fluent in English.  Although SMU requires a fairly high English score on the KSAT test, attaining a good score on an English test and listening and understanding English well are completely different.  Furthermore, not all professors speak English well enough to convey their specialty subject.  When they attended university, English education was not as good as it is today, so most professors’ English pronunciation and speaking ability are rather low.  On the other hand, some professors despite being proficient in English are unable to pass onto students understanding of their subject when teaching in English.  All in all, the teaching of major subject lectures in English benefits neither students nor professors.
Although English is important in this era of globalization, schools must consider education first.  Therefore, I assert that major subject lectures taught in English should not be increased.

These days, there are lots of English taught lectures at university.  Although there has been great argument over English-taught major subjects, they provide more advantages than if the courses were only taught in Korean.
First, these lectures will widen students’ right; they have the right to choose the lecture language.  At university, students have the right to select lectures according to personal preference or with their future in mind, so there should be various lectures offered.  While some students may wish to study in Korean, other students in particular those preparing to study abroad may want to enroll in major subjects that are offered in English.  Therefore, increasing the number of major subject lectures in English would satisfy student demands.
Secondly, some subjects, if taught in English, would provide better understanding of the subject matter than if the subject was taught in Korean.  Many courses like economics, science, and sociology originated from the West and were developed in America.  Those countries used English as part of the academic world.  If translated those words would have different meanings from the original English words, which may confuse students or incorrectly detail data.  Thus, teaching major studies in English helps students to learn correct knowledge.
Lastly, the more English lectures provided by a university, the more competitive edge the university has in this era of globalization.  Students are living in a connected world, so high levels of communication and language ability are essential.  Offering major subjects in English is the way a university raise students’ global capability.  Also, from foreign students’ perspectives, when they study in Korea, they choose universities offering many English-taught major subjects because there they are not proficient enough to understand Korean lectures.
In conclusion, English-taught major subjects should be offered because they will bring benefits to both students and the schools.