During your school years, you learned history for over 12 years.  In history class, maybe you tried to memorize major events of each king’s reign and the chronicles of several Dynasties.  Through these history lectures, you learned that the major authority is the king, and that men are traditionally dominant.  However, have you ever thought about the grounds for authority?  They are concepts such as sacrifice and effort.  Whether men receive authority naturally or they gain it themselves, these concepts have always gone hand in hand with men who have authority.  People usually say that these ‘invisible’ qualities are the core of power.  In this article, the Sookmyung Times will introduce you to a very special example of these invisible powers.  That is the hidden main force of authority beyond the world, history, politics, and culture: the "Mrs." 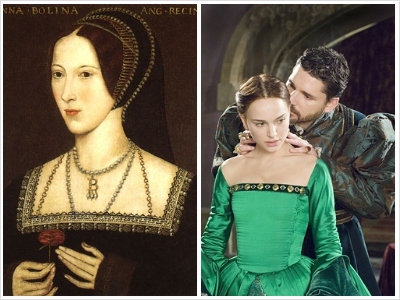 In March 2008, the movie “The Other Boleyn Girl” was released in Korea. It tells the story of one of the greatest kings of the United Kingdom, Henry VIII, as well as Mary Boleyn and Queen Anne Boleyn.  If you have seen this movie you already know that people recognized Queen Anne Boleyn as a temptress.  But how many people know the fact that she was a schemer before she was a temptress? Henry VIII was a young and passionate king and the famed Casanova monarch of England.  He had many paramours; the Boleyn sisters, Anne and Mary, were among them.  Unlike her sister Mary, who really loved Henry VIII, Anne had a cunning strategy to become the Queen of England using Henry.  He suggested to her that she become his mistress, but she rejected him and asked him to marry her so that she would become Queen.  Unlike other girls, she rejected him, so he truly desired to have her day by day.  Thus in order to marry her, he broke with the Catholic Church, established the Anglican Church, and divorced his wife, Catherine of Aragon. (In those days, the Vatican didn’t allow divorce.)  After the religious reformation, he married Queen Anne Boleyn.  At this time she was already pregnant.  The British people believed her baby was a son, but she delivered a daughter.  Because she didn’t give birth to a son, she underwent abortions many times, and after all, she was executed for committing incest with her brother.  Ironically, her daughter, who received all of England’s expectation and disappointment, became the greatest monarch of the United Kingdom ever, Queen Elizabeth I.

Was she a temptress or ambitious woman?  People still can’t be sure of that fact.

Anne Boleyn was an ambitious woman but she could not experience her ambition, and ended her life on the gallows.  There are many interpretations of her life, one of which contends that she was just a means of getting a son for Henry VIII. But it is certain that she changed England forever; because of her, a new religion was born, the Anglican Church. 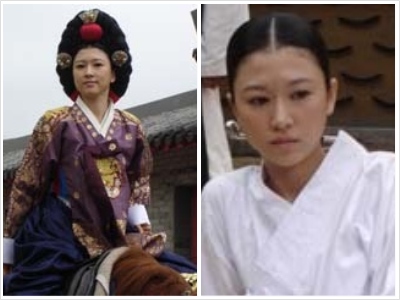 Most people know that the greatest forerunner of Korean civilization among the Royal family was King Jeong-jo (reign: 1776~ 1800), who was the 22nd monarch of the Choshun Dynasty.  But the real forerunner of the Royal family came long before him.  The Crown Princess Kang-Bin was the prime mover of early Korean civilization.  She was a wife of Crown Prince Sohyeon Saeja (1612~1645), who was the son of King In-Jo (reign: 1623~1649.)  After the Byung-ja war (1637~ 1644), which was the war between the Choshun Dynasty and the Cheong Dynasty (an older name for the Chinese nation), she was dragged along to the Cheong Dynasty with her husband and brother-in-law as a hostage.  For nine years, she didn’t yield to her hard hostage situation but she helped her husband and did her best to improve the Choshun Dynasty by trying to bring in Western cultural activities and keeping an amicable relationship with the Cheong Dynasty.  Finally, she succeeded in large-scale agriculture and international trade, but her foresight resulted in cruel punishment.  Two months later, Crown Prince Sohyeon Saeja was wrongly accused of rebellion, and was poisoned.  One year later, Princess Kang-Bin was executed by her enemy’s slanderous intrigue. Because of her involvement in this intrigue, she has been estimated in history books like this: “She was greedy and fickle, tempted her husband to bad ways and didn’t know how to serve her family.”  But she carved out her destiny within the closed Royal family, and did her best passionately for her country.

Reflecting on her passionate life, people can call her a real forerunner of civilization in the Korean Royal family. 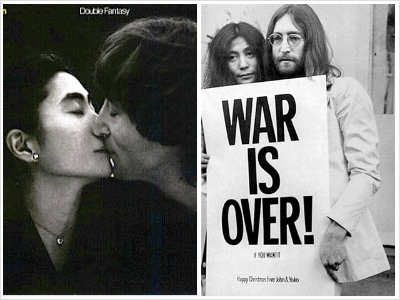 Witch of The Beatles or promising performance artist?  These are typical words that are used to describe Ono Yoko.  She was born into a rich Tokyo rich family, and she brought out the sensation of modern art through her work as a performance artist.  During her exhibition in London, she happened to meet the vocalist of the best pop group in the United Kingdom: John Lennon of The Beatles.  Their meeting soon became a signal of the many changing cultural points of the 1960s.  Their inter-cultural desire gave each other much inspiration.  Sometimes they were like friends, sometimes they were like enemies.  They shared each other’s cultural spirit, and created a new culture constantly.  John Lennon was affected by Ono Yoko; later he sang many songs about the antiwar movement, peace and liberty.  But John Lennon fell in love with her too much, so he didn’t care about his group anymore.  Naturally, there was gossip about the dissolution of The Beatles, and in the end they broke up.  Fans and even members of The Beatles blamed Yoko.  Eventually on December 8, 1980, John Lennon was murdered by an ardent fan, ending their relationship.

John Lennon was at The Beatles’ core, and Ono Yoko was at the core of John Lennon.  She chose cultural power herself.

People can’t estimate for sure whether she was a witch who destroyed The Beatles or a helper who helped John Lennon grow into a more popular singer than ever, even now.  However, through this story, we can know that one of the main essences of a moving cultural power, The Beatles, was Ono Yoko.

Hillary Clinton, a Perfect First Lady and Representative of the Power of Women 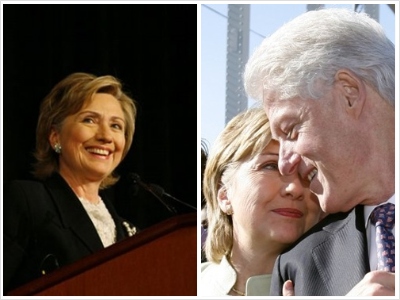 The main character of this story, Hillary Rodham Clinton, also chose her power herself.  She has had a great influence on not only America but also the world as the first lady in America, and now is a potential presidential candidate of the Democratic Party.  She was an outstanding student in her school days.  After she married Bill Clinton, she would play an active role in her husband's transition from Congressperson to President.  Hillary was pretty smart, and Bill used her wisdom in his election campaign, but it was somewhat of an error.  When Bill Clinton too part in his election campaign, his campaign promise of "two for the price of one" led opponents to refer derisively to the Clintons as "co-presidents,” or sometimes the Arkansas label "Billary.”  Finally he became President of America, and Hillary also helped him in White House activies.  Although she failed in her biggest plan, National Health Care Reform, she made many bills for children and women, such as the State Children's Health Insurance Program (1997), and the Office on Violence Against Women (1997).  Like that, she didn’t remain merely a first lady who assisted her husband, but instead chose to be his co-worker.  Also she has always believed in her husband, and this trust has moved many Americans.  In 1999, she was elected a member of the Upper House. Ultimately she obtained two honors; senator and first lady.

What is her different point compared with other first ladies?  The answer is that before her, all first ladies in America just used their power to make donations or establish foundations for orphans.  But Hillary used her ‘first lady power’ perfectly by making practical bills for orphans, women and many other people.  In short, she properly used her ‘first lady power’ to become the mistress of the nation.

Eva Peron, the Saint of Labor and the Lower Classes 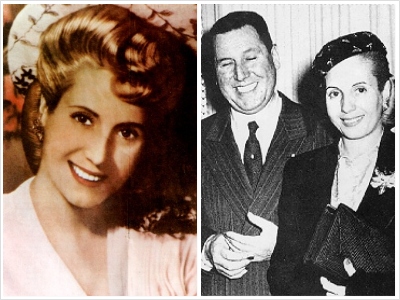 ‘Don’t cry for me, Argentina.  The truth is I never left you…’  Those are lyrics of the world-famous song, ‘Don’t Cry for Me Argentina’ from the musical ‘Evita’.  Actually, this song relates to the special life of Argentina’s forever beloved first lady Eva Peron.  Before she met her husband Juan Peron, she was just a nomadic actress in a lowly dramatic company.  She and Colonel Peron fell in love at first sight and she became his mistress.  When she was 25 years old, the military junta seized power in Argentina.  In 1946, Argentina elected Juan Peron president, and Eva became the first lady.  After she came to power, she herself tried to change the fortunes of the lower class based on her own poor past rather than disregard it.  She really wanted to be a true friend to laborers, so she met them directly; she offered medical services to the lower class for free, passed women’s voting rights and so on.  Her dedicated efforts moved many Argentines, and her popularity helped the performance of President Juan Peron’s policies.

Using one’s image is a very important part of politics.  Eva Peron already realized this fact, and used the image of her poor past well, so she made it seem that Juan Peron’s Government became successful largely through her image and popularity.  Some say that it was just Populism, but many people say that there has never been any first lady in the world like Eva Peron.  Although she died of cancer when she was only 33 years old, Argentina mummified her corpse and the world remembers her life in the musical ‘Evita.’  Like this, the world will praise Eva Peron forever.

Many wives of great leaders have been more powerful than people think, and they have constantly been at the center of power struggles.  As you come to know the history, you discover that past madams didn’t reveal their own ability or ambition directly, but just tried to help their powerful men quietly, often using secret routes.  But the most fascinating fact about powerful wives of these days; not only can they help their husbands actively but they can also achieve their own personal power.   They often create a whole new power by their own hand.  You already know that Hillary Clinton is preparing to become the 43rd president of the USA in the Democratic Party.  Possibly you too can one day be a “super madam” like these ladies.  Do reveal your ability and ambitions.  Then you may stay with your husband as not only a partner but a woman of independent power.