China, Getting Closer to Us
상태바

Historically, China has always affected Korea; since the age of Dangun Joseon, the founding father of the Korean nation, up to these days.  You can find many things influenced by China, for example, Confucianism, Chinese letters etc.  Nowadays Korean culture, including dramas, movies and music, is becoming popular in Chinese society, a trend which is called the ‘Korean wave.’  Continuously, the two countries’ bond is increasing dramatically.  According to the Sinology Center in Korea, relations with China will become a more and more important part of Korea.  Are you preparing for this situation?  Many people are learning Chinese; however, understanding their culture and history would be the first approach.  Do you think you understand enough about China?  The Sookmyung Times (SMT) met LV Jing(LV) from China, who is studying at Sookmyng Women’s University.

SMT: You are living in the generation of change in China; do you feel any difference between past and present?
LV: These days, especially in the cities, most families are trying to have only one child.  If they have more than one child, they are forced to pay a special tax.  Because of this policy there are many only children.  They are considered selfish in Chinese society, especially in the cases in which they are raised in rich families.  However, there are also good sides of this fact.  Today’s children are more open to foreign cultures and the world.  Also they express their thoughts more freely and glow with pride.

SMT: Is there any difference between your Korean friends and Chinese friends?
LV: Korean friends have too much pressure about employment.  They always worry about this matter and study really hard to get good grades in order to enter a better company.  Because of this, I also have to study a lot and I was under stress too.  But it is impressive that they are always making a plan for their life.  On the other hand, many Chinese friends don’t have much pressure to get a job.  They help their parents with house work, and they don’t stick to studying.  On campus, they enjoy their life.  Another thing I felt is that Korean friends are very interested in dressing up.  When I was in China I barely wore make-up myself, but now I’m really good at make-up.

SMT: Are Korean dramas really famous in China?
LV: Sure.  Most Chinese people have heard about Korea through dramas.  However many people misunderstand Korean culture.  A typical subject of Korean dramas deals with the trouble between a daughter-in-law and her mother-in-law.  For example, if a woman marries to man and if she lives in her husband’s house with his family, she will have some problem with her husband’s mother.  You can find many scenes in which a woman’s mother-in-law is cruel to her daughter-in-law.  However some Chinese people believe that all Korean daughters-in-law and mothers-in-law are always in conflict situations.  Another thing I could see in dramas is that Koreans often judge people by their appearance.  Now I live in Korea and I think it’s true.

- Recommended Movies
Do you want more information about China?  According to LV Jing, dramas and movies based on historical fact are popular in China.  Here are some recommended movies to understand their country. 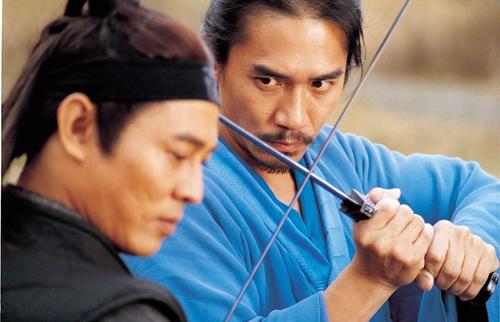 Using the assassination attempt of the historical figure, Chin Shi Huang (the first emperor of China) as a background, this story tells us about what it means to be a hero in a Chinese cultural context.  During the peak of China's Warring States period, the country was divided into seven kingdoms: Qin, Zhao, Han Wei, Yan, Chu and Qi.  For years, the separate kingdoms fought ruthlessly for supremacy.  As a result, the people endured decades of death and suffering.  The Kingdom of Qin was the most powerful of all.  The king of Qin was obsessed with conquering all of China and becoming the first emperor.  He had long been the target of assassins throughout the other six states.  To anyone who defeated the assassins, the king of Qin promised great power, mountains of gold and a private audience.  But defeating the killers is a near impossible task. (http://www.rottentomatoes.com/)

By watching this movie, you will learn of the important idea of the Chinese: Sinocentrism, which means any ethnocentric perspective that regards China to be central or unique relative to other countries.  The focus of this movie is the unification of the separated kingdoms and constructs one new country.  During these processes, many people have to be sacrificed for a greater justice.  Is this always right?  Nowadays in China, there are still many minority races who are suffering from oppression for the sake of a united China.  This movie would give you a chance to think about this situation. 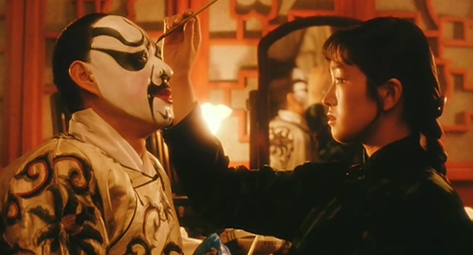 This is the movie about two boys named Cheng Dieyi and Duan Xiaolou.  They grow up enduring the harsh training of the Peking Opera Academy, where instructors regularly beat the children as a means of instilling in them the discipline needed to master the complex physical and vocal technique.  As the two boys mature, they develop complementary talents: Dieyi, with his fine, delicate features, assumes the female roles while the burlier Xiaolou plays masculine warlords.  Their dramatic identities become real for Dieyi when he falls in love with Xiaolou; the resolutely heterosexual Xiaolou, however, marries a courtesan, Juxian, creating a dangerous, jealousy-filled romantic triangle.
(http://www.rottentomatoes.com/)

The director of this movie, Chen Kaige, spanned 50 years from the early part of the 20th century to the tumultuous Cultural Revolution.  His passionate, exquisitely shot film captures the vast historical scope of a changing world while also providing the intimate and touching details of a unique, tender, heartrending love story.  In this movie you’ll see the beautiful harmony of colors and gorgeous costumes.  However, this is not all.  You’ll also see the important historical events in China through the background of the Beijing opera played out in the movie.  The corruption of the Imperial house in the 1920s is represented by an old eunuch.  In the thirties, China had bitter experiences with opium.  These are plainly shown too.  In the forties, an unpatriotic act related to the Japanese army is represented.  The film also presents the Cultural Revolution which played a great part in Chinese history.