The Way Investigating Your Aptitude
상태바

Some people may say, “If everyone cannot do something, you cannot do it either.” It might correspond to her position, Director General at the National Institute of Scientific Investigation (NISI). In institute investigating crime cases through science, a woman is assumption of the office as Director General. When asked how she got to her
current position, she answered, “I was just doing what I was interested in.” From this answer, the Sookmyung Times (SMT) felt respect and inspiration. Is there any fruitful life through doing what I want to, obtaining social acknowledgement? SMT met the Director General at the NISI, Chung Heesun (CHUNG), who graduated from the college of Pharmacy in 1978, and received advice on how to become fruitful. 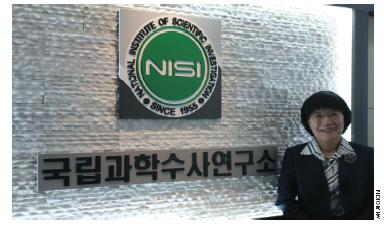 SMT Are there differences between the real investigator processes at the NISI and the American drama CSI?

CHUNG The most different thing is that CSI’s events are solved within only one hour. Eventually, as CSI is sublimated into drama, certain investigators go to the scene of the crime, return, and they analyze the evidence for themselves.  However, in the real world, every work is specialized. Most work in NISI, especially analyzing, needs scientific background. Generally, investigators pick evidence. Then researchers in the laboratory analyze. However the stress and tension are similar to the drama.

SMT Is there certain devotion up to present status than other people?

CHUNG In Korea, generally, ‘clique’ has a negative meaning but in English it can be softly expressed as
‘networking.’ In the position of supervisor, working eagerly is insufficient. To improve in a corporation, it’s necessary to request something from others. If there is some relationship or connection, it’s much easier to move up in business. The most important thing to make relationships is cherishing them. In my case, I write letters, make some gifts, or call friends who I meet at international academic meetings. To practice this, I should become more
diligent in my busy day, but the affection towards friends is priority.

SMT Was there certain handicap in
becoming Director General at NISI because you are a woman?

CHUNG I also suffered from the glass ceiling. My colleagues were promoted, but my promotion moved
slowly. Being left behind made me feel unfairness and distress. However, I loved my job so I couldn’t
throw away my job. Naturally, I ignored the promotion problem and worked more enthusiastically. While
I was devoted to my job, the problem was solved. Once I overcame it, the next promotion could be
accomplished easily. Eventually, loving my job seems like the most important thing.

SMT You look very happy with affection toward the job. However, recently, many students seem to lose
their vision regarding their future careers. If there is any advice to these youngsters searching for vision?

CHUNG Eventually, it is up to indirect experience because direct experience has limits. To realize what they like
or what they want to become, youngsters should have various experiences. Hence, the fast way is reading books. In a sense, however, the university period is free from responsibility because the mistakes are covered up easily. Therefore, there are also many chances to have direct experiences. Of course beyond reading books, an active attitude is needed . participating in volunteer works with a challenging spirit. lthough I was a Pharmacy major, I
tried to keep books nearby. In addition, I also took part in a volunteer club; I learned how to adapt to the social system. If I had not joined the club, when I met the glass ceiling, I may have left NISI. However, am I here in this position? That’s why experience is important.