This Is the Start, not the End
상태바

It’s already two years later, since I went to Germany.  Looking back upon my university life, I think that time was the best chance and a great change for me.  Now, I reflect on the past with passion.  I hope this story helps other students who are preparing for an exchange student program.

At the same time when I chose the department of German language & literature, I decided that I will be an exchange student.  I took lectures related to languages intensely since I was a freshman.  I learned German as a second language in high school.  But I think that even though a person didn’t learn German before entering university, she can study it from the beginning thanks to a well ordered curriculum.  Conversation class by a German professor would be very helpful when it comes to removing fear for foreign language.  I recommend that you take a summer course hosted by Bamberg University.  I went there in 2007’s summer vacation.  Surely through the course, I could increase my overall ability in German.  But the most advantage of summer course is that the experience at there was very helpful later when I adapted to Bamberg as an exchange student.  If you can visit a city where you will study for one semester or one year, I recommend that you go there.  Also, before going to Germany, you must cultivate your ability fully.  And you should confirm the scholarship system before leaving.  Seeing the notice of an international exchange team, I got an opportunity to gain a scholarship by applying as an ASEM-DUO scholarship student.  The ASEM-DUO scholarship picks a student through marks and planning charts written in English.  Besides it, there can be various scholarships, so check it carefully.  I hope that you get a good chance.

Before the semester at Bamberg University, Vobereitungskurs, the program for exchange students, is held for a month.  The German student tutors help the exchange students to register for the semester and to make an account to obtain a visa in this program, so don’t worry about that too much.  There are a variety of programs planned each day and there are also weekend experience programs planned.  I went to Oktoberfest which I just heard from other people.  It was a good chance to experience the traditional German festival.  Besides, the exchange students can make many friends from various countries in this program.  Most exchange students who participated in the program spent their semester with friends who became friends during the program.  Europeans are interested in Korea, contrary to our expectations.  Hence, it’s good to you to know about the basic information of Korea such as relations between South and North Korea.  It was a useful time for me to learn about cultures of many countries as well as Germany.  My dormitory, COE, allows students to choose rooms for one, two, or three.  Fortunately, I used the room for three with two German students.  If I used the single room, I would have to buy all my own necessities.  However, I could use the necessities which my roommates had used.  It was attractive to me that I could live with Germans in Germany. 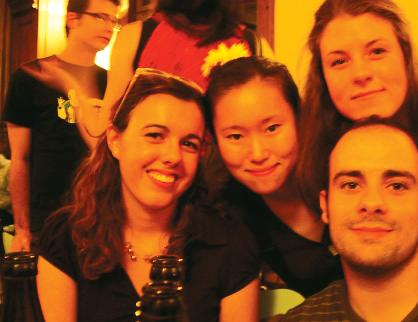 Bamberg University offers a high quality exchange student program.  Many types of courses are provided, and you can study classes you want, and can study as much as you want.  Among the classes, the class that was most special to me was Theater workshop, and Zeitung lesen, verstehen.  I studied Theaterworkshop, because of a friend’s recommendation.  It is a performance class, so after preparation for one semester, I acted a part at the end of a semester.  It was a precious experience that I’ve never experienced in Korea.  It improved not only my German, but also my self confidence.  ‘Zeitung lesen, verstehen’ was the toughest class, but it deserves that.  The students choose one issue from all over the world’s news, and present and discuss about that.  We had different points of view, as we had different cultures.  It made my perspective wider, and stimulated me by others.  On the other hand, you can also enjoy a party almost every weekend.  I made Gochujang (Red pepper paste) spaghetti at an international party.  It was a chance to taste each country’s various foods.  If you like a party, I recommend you to enjoy them.