SMT: Fairy tales’ stories, structures and reasons why the stories are needed by children are changed according to the concepts of contemporary children.    In this generation, which fairy tales are needed?
LEE: Fairy tales are fantastic and lyrical stories and literature which are interesting for everyone without distinction of gender and age, so they should make everyone who read it relate.    However, fairy tales are not fantastic and marvelous reading material anymore.    The generation which people were caught by dreams and hopes through
reading fairy tales has gone and fairy tales have become avoided and unfamiliar.Readers already know the stories of
princesses, princes and wolves aren’t true in real life.    They throw up their hands from fairy tales because they think the fairy tale is possible only in a dream and it is childish.    For them, fairy tales should become the story which can discuss real life with them.    It doesn’t need to be parallel with the experience of readers, but it makes them find themselves and develop.    It should be the story which gives the hope of utopia with a practical and detailed episode related with  the real world.    Fairy tales also make readers come away from a story to take a look at themselves, not to just losing themselves in the story.
SMT: Nowadays, fairy tales for mothers and children or for adults are coming out.    Which of the following age groups would read fairy tales?
LEE: Commonly we call age 5 to 10 the age group of fairy tales.    Beyond that age, we make light of fairy tales and don’t try to remember the stories.    However, after having children, we start to read them for our children and even suggest they read fairy tales.    After the children grow up, they become indifferent to fairy tales again. Through this fact, it is easy to misunderstand that fairy tales are disregarded in a whole life except the age that is related with fairy tales. However, in fact, we are always related with fairy tales and pretend to live in the world of a fantastic story.    Real life is hard, but the fairy tale’s world is a world of hope and dreams.    Therefore we need to change our mind to make fairy tales.    The authors need to make stories which appeal and give a big impression to everyone, whether made for children under 10 or children above 10 or even for adults.
SMT: Yellow Umbrella, which has no words has attracted attention.    Also the picture books from all over the world are being introduced as soon as they are published. It is the palm days of picture books in Korea.
LEE: Picture book is the book with various detailed description which brings the education effect to improve children’s visual and affective sense through the literary and artistic composition.    Also it makes children who don’t know words grow creativity to be able to converse with pictures.    Children are imprinted with the appearance of main characters which are left indefinite when they listen to the stories only without pictures, and finally children feel the pleasure of identifying with the main characters.    It gives dreams and hope to children.    Picture books give a good effect and picture books from all over the world become a good stimulation to develop
Korea’s picture books.    However, the picture books from other countries are dominating our book market.    Thus we need to make our own picture books with our fairy tales, not only prefer the picture books from other worlds.    It is urgent to raise our picture books to a global level.    I think making our own picture books suitable with globalization is the desirable way to make our children have right values and identities.    Fortunately, the number of people who have interest in authoring picture books is increasing.    The more the better, if many people becomeauthors of picture books and show better picture books, the education with our fairy tales would be better and more effective. However various fairy tales become dark with the purpose of selling than pure education and care, so authors need to be careful to avoid it.
SMT: Fairy tales have become flash or applications for smartphones beyond the conception of books.
LEE: The category of fairy tales is increasing. In this atmosphere, it is natural that the contents of fairy tales are developing to be suitable with the twenty-first century.    I think it is passed by that fairy tales are used by books only. I encourage the increasing of children’s education with various media. 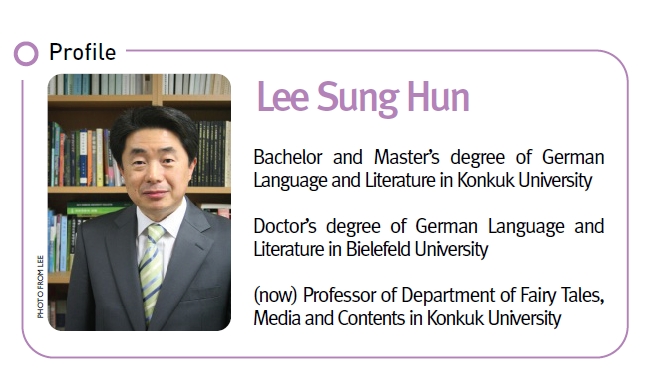