Society Needs Us, We Can Achieve It!
상태바
Study Groups in SMU

In SMU, there are six kinds of study groups: Sujungdang 1,2 for students who are preparing for the bar exam and the patent agent exam, Sookjungwon for students who are preparing for the Foreign Service Examination, Sookjiwon for students who are preparing for the accounting examination and CPA (Certified Public Accountant) exam, Mungeunjae for students who are preparing for the media entering exam, and Myunghwarangfor students who are preparing Higher Civil Service Examination.  Most of them are for state examinations, so few students can join.  SMU consistently provides lectures, special courses, rooms for study, and scholarships to students in examination study groups.  Moreover, students who pass the primary examination get an all expenses-paid scholarship for one year.  Students who pass the second-round exam get an all expenses-paid scholarship until they graduate school.  In detail, Sookjiwon has a study room next to the MATE test site.  They open at 8:30 AM and close at 9 PM, and they check the attendance.  The type of test is different from each grade.  Oh Junseok, professor of economics said, “This study groups there are two tracks, one is called track A and another is track B.  After ending of CPA special lecture, both of tracks will be operated.  The schedules of operating are three courses.  First, special lectures by the best professors are progressing.  Second, mock test is offered twice a month.  That test’s questions are set by professors of economy and accountants.  Last thing is library construct.  It is a kind of tests, but difference is these tests are come from students who are studying in Sookjiwon.  Except those, Sookjiwon is supporting video lecture and books for students.” In case of Myungeunjae, they recruit new students in March and September.  They test English, and essaywriting and select students.  Myungeunjae is a study group for the media exam, so they provide journalists’ lectures and essay institutes with reporters.  Many Division of Communication students are applying for it, but major is not a plus point to join the group.  Competition to enter Myungeunjae is very stiff; however, they made a good result.  Myunghwarang also checks the attendance every morning and night, and they share the lecture with the team.

We have same purposes!

In Sungkyunkwan University, there are also many preparation classes for state examinations.  In SMU, Sookjiwon has same function as SKKU’s Songhaehun whose students are studying for accountancy.  Myunghwarang in SMU is the same as Waryunghyun in SKKU.  Students who participate in that are studying for the civil service examination.  The difference is Waryunghyun has some requirements.  Only students who have graduated since 2008 can attend.  Moreover, both colleges have a class for future lawyers.  In SMU, the name is Sujungdang.  It is divided into two classes-one for the bar exam, and the other for other state examinations.  The corresponding class at SKKU is Samahun.  The purpose of that is to raise future experts of law who can lead all over the world.  Unlike SMU, there is another place for patent exams.  In SMU, that class is included in Sujungdang.  The most famous class, both on campus and elsewhere, is Myungunjae, which prepares SMU students for the press examination.  Many journalists from SMU have participated in that group.  In SKKU, they have a group which has the same function with ours.  The name is Yepiljae.  In this way, SMU and SKKU are very similar in their special classes.  However, as SKKU is not a female college, they have a special class different from SMU’s.  Its name is Yunryongjae.  The class’s students study for technology examinations. Mainly, members of Yunryongjae are male students.  A professor who has responsible Waryunghyun said about these system.  He said, “ We are helping the students who prepare the state exam through giving reading room, video lecture, money for buying books and specially dormitory for living.  Our goal is they can study those test without going Sillimdong.”  In Hanyang University, there are also many special classes.  There are four classes which have different purposes.  Unlike SMU, there is also a technology-exam class.  If a student enters into that, he can get free meals while living in the dormitory.  Besides that, there is a Patent Agent class.  It is similar with Sujungdang.

We Want to Know Those Classes.

In SMU, many special classes are waiting you.  Do you know how many and what sorts of classes there are in our school? According to research, many colleges invest much in their special classes.  Sogang University built special purpose building for students who are studying for exams.  The main reason is many universities want to raise their levels, and they use charts to show how many students get through the exam.  For that, they spend a lot of money which is paid for by every student in the college for special students.  In the research, 22 universities spent 172 billion won managing them.  In this course, other students will be concealed by a minority and it will decrease students’ capabilities.  About this Im Jaehyun, a professor of SMU said, “Many students want to be a civil servant, so it causes them to increase demand.”2 We should not look on that.  Certainly they can get help, but they can’t be criteria among colleges.  It is just their dream and choice.  Though, in the future, they will be well known and it will help the university’s fame, the most important thing is every student in the school’s welfare.  Colleges have to strive not merely to support some parts, but to live together with all the students.  For that, they can focus on students’ substantive needs like getting jobs.  They must move toward better quality and depth of education.  In the course, both helping to prepare for state examinations and supporting jobs in the private sector can be developed. 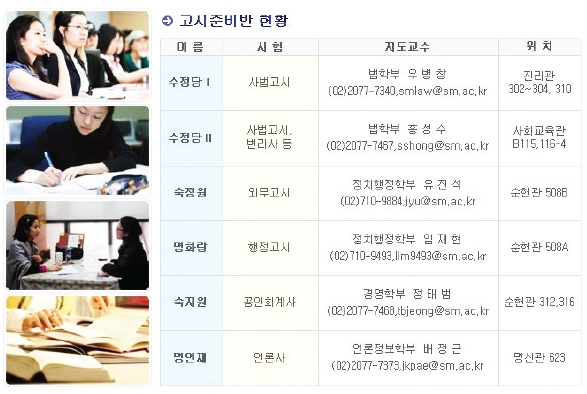 Difference in Other Colleges

In SMU, students who study in special groups get scholarship.  There are some levels about limit of giving.  A level is given the person who pass second test in examination, B is for first test’s successful candidate and C is for whom get special certificate.  Also they can live in dormitory with fellowship from school.  In Kukmin University, they provide some money for buying book of test.  In Myungji University, they open 24hours reading room, support video lectures and some money for aid.  There are many differences between Sookmyung Women’s University (SMU) and Ewha Women’s University (EWU) regarding the support for special study group.  Unlike SMU, EWU gives student who is studying in special groups for the state examination a large amount of support.  First of all, EWU gives them ‘mentoring system.’ There are many successful candidates who are from EWU.  Through them, the freshmen of the state examination can receive some advice. Second, EWU has appropriated lots of budget in those groups.  It causes the student to have much contentment about their school and it encourages them to study harder than other students.  However, in SMU, their systems of study group for the state examination are very insufficient. Classrooms for them are mainly in front of a lecture room, so it’s usually noisy.  Hong Sungsu, a professor of law school said, “In present, supporting rooms for them is urgent.  So, we need a place where it is silent and independent.  Also it is good to be built dormitory for those students.” According to a survey, in the bar exam, EWU’s ratio of successful applicants was 17.2% (31.0/180), but there was just four students from SMU.  In the background of this result, the lack of supporting was a big part.  In Sookmyungian’s bill board, one student wrote about this result.  She said, “I can’t understand this result.  I think lack of supporting and students’ indifference is matter.  I want to progress our school more and more about this area.  For that, students who are supported from college should study more impassionedly and SMU have to shore up them and reorganize those systems.” 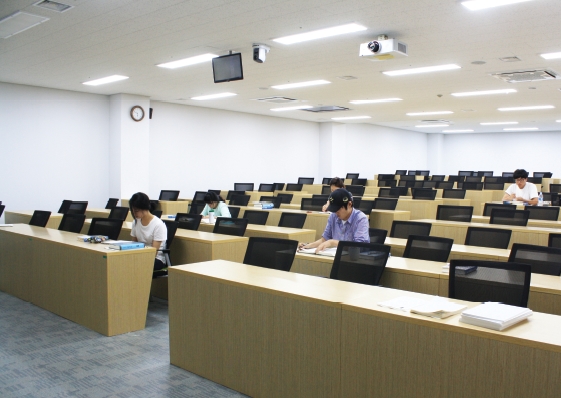 Colleges Want to Get Other Things.

Many universities in Korea have made special group called ‘Gosiban’ which supports students who prepare state examination.  However, their purpose to make this group is not just supporting those.  The hidden goal is to receive magnificent students’ applications for admission.  For that, rate of getting through state examinations is important.  It can advertise that school more effectively.  For that reason, many universities concern those classes.  Doing that, some universities got high output for example Sogang University was 37.5% in the bar exam.  Both school’s efforts and students’ passion raise the synergy effect.

The special study groups are helpful for many parts.  With them, we can get many profits about preparing the state examinations.  Also, we can have pride of presence in those groups.  It can elevate school’s level and name value.  The reason is it is one of measures to show college’s education and welfare for enrolled their students.  Moreover, it is good to grow very fit feminine ideal which our society wants.  Therefore, college strives to grow those classes more than now through some aids like money and facilities.  Not only concerning those but looking other student’s life in SMU is also important thing.  College must provide capability from basic to deepen for all students.  That is, strive to give opportunities for other students through collaboration between university and business.  Hanyang University, Future car major makes an agreement with Bosch in Germany, Hyundai and Kia, so supports opportunity to study for many students.  Like that, college should get faith of equal to their enrolled students.  It is impossible thing without their opinions about system.  University which is like a small society will be strong with student’s participation and concern.  Also those will upgrade student’s right.
저작권자 © 숙명타임즈 무단전재 및 재배포 금지